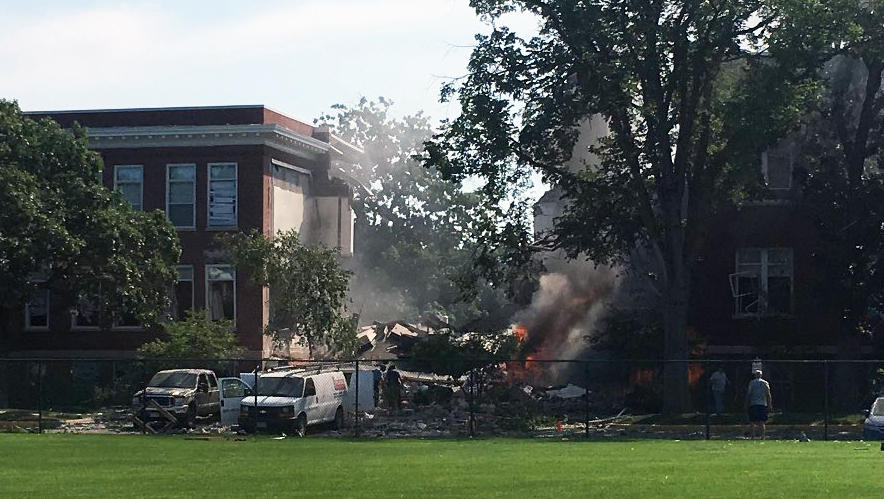 MINNEAPOLIS -- Two bodies have been found following an explosion at a private school in south Minneapolis Wednesday, CBS Minnesota reports.

The Minneapolis Fire Department confirmed that the body of John Carlson was discovered in the rubble at about 8 p.m. Investigators will return to the school Thursday morning, CBS Minnesota reports.

School officials confirmed that one of its Minnehaha Academy staff members were killed in the explosion: Ruth Berg, 48, who worked as a receptionist there for 17 years.

"She welcomed everyone with a smile and was always willing to go the extra mile to help our students, families and staff," officials said.

Her fiance told CBS Minnesota he was informed. She was supposed to have been married in October.

By late Wednesday afternoon, one of the victims -- Bryan Duffey -- was still in critical condition. Duffey is an assistant soccer coach at the school.

Three other victims are in satisfactory condition, and five were discharged from the hospital.

The explosion was caused by a natural gas leak as contractors were doing work on the building, officials said.

Helicopter footage showed flames and wreckage in the middle section of the building. The fire was put out by early Wednesday afternoon.

Minnesota Gov. Mark Dayton said the state was in touch with local authorities to assist in the response. He said the state will "provide any and all resources necessary to aid first responders" and those affected by the blast.

Allison Schmitz, whose child attends Minnehaha, told CBS Minnesota's Mary McGuire that people were given 15 seconds to evacuate after a gas leak.

Jack Mahler was playing soccer nearby at the time of the explosion.

"We heard a man yell 'gas' and 'get out', and we saw one sprint down the street and one sprint into the building, kind of standing in the doorway, yelling it. About the time the man sprinting down the street got to the end down here there was a huge explosion," Mahler said. "Smoke went up and knocked most of us back. It knocked me off my feet."

Minneapolis fire officials say it appears no children were hurt in the incident. Minnehaha Academy says all Summer Program students and staff are "accounted for and safe."

Master Mechanical released a statement, saying: "Our thoughts and prayers are with everyone involved in the incident. We are monitoring the situation and at this time we are referring all questions about the event to the Minneapolis Fire Department out of respect for their investigation."

The explosion happened near the school's office and maintenance area. Neighbors said they heard the "boom" from blocks away.

"Live across the street from Minnehaha Academy, heard the blast, felt the window shake," said Deborah Dillaway. "The dogs were startled and came out 30 seconds later, saw where the building used to be one continuous building now had a gap. I could see sunlight all the way through to the other side."

Residence felt a tremendous blast, and some could even smell natural gas in the neighborhood. When they looked over, all they saw was a cloud of dust and piles of rubble.

Within seconds of the powerful explosion, residents poured onto sidewalks and front lawns, stunned at the burning pile of rubble that moments before was a century-old school building.

"I was just sitting, reading the paper and there was just a huge blast," Dillaway said. "We used to live in San Francisco, and there are two types [of earthquakes]: one is a short, quick one, the other is a longer one. It felt like the plates were shifting."

Moments after rescuers pulled a critically-injured man away from the debris, burning gas made it too dangerous to search for any others.

"We have been able to confirm that the explosion the collapsed was caused by a gas explosion," said Bryan Tyner, assistant chief of the Minneapolis Fire Department. "It may be where we can move it brick by brick, or where we have to get heavy equipment to move the bigger slabs or portions of the building."

A number of former students were stopping by to see the damage for themselves.

They told CBS Minneapolis that the building was built in 1913, and they had celebrated its centennial just a few years ago.

A vigil is expected to be held at 7 p.m. local time.