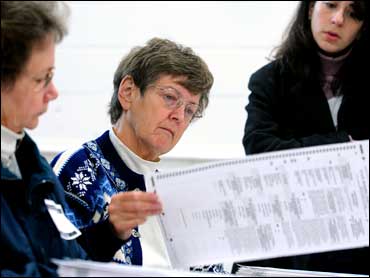 The weekend isn't bringing any respite in the Minnesota Senate recount.

Ballots in the ultra-close race between Republican Sen. Norm Coleman and Democratic challenger Al Franken were counted in at least three counties Saturday. While Coleman's razor-thin margin over Franken has narrowed since the recont began, it grew slightly in Saturday's count, from 115 to 167 votes.

About 73 percent of precincts have reported complete results to the secretary of state, with only a few dozen counties remaining. As of Saturday night, about 66 percent of the estimated 2.9 million ballots had gotten a second look.

Coleman entered the recount with a 215-vote edge over Franken. That lead has dropped to 167 votes when comparing totals in precincts where the new count is complete. But the figure doesn't include ballot challenges, which have caused vote tallies for both men to drop.

There have been 1,893 challenges between the campaigns, some could be withdrawn before the Canvassing Board's Dec. 16 meeting.

Officials for Coleman and Franken said Friday they'll review the hundreds of challenges they've made so far in their Senate race recount - and withdraw some - before the state Canvassing Board meets next month to consider them. Still, both campaigns introduced hundreds of new challenges Saturday.

Minnesota's Senate battle is one of two that are unresolved, with Georgia's headed for a Dec. 2 run-off. If Democrats win both, they would have a 60 seat majority in the Senate.

The mounting pile of challenged ballots is becoming a significant factor in the overtime Senate race. It has nibbled into the vote totals of Coleman and Franken compared with the precinct-by-precinct counts on Nov. 4.

The comparison is made possible because counties are reporting recount numbers that compare directly with their precincts' Nov. 4 results.

However, those numbers are expected to shift daily until the counties complete their work.

And the final outcome will likely rest on the 1,893 ballot challenges filed by the two campaigns, due to be taken up by a special canvassing board Dec. 16.

See results from the Minnesota Secretary of State's Web Site.

At dueling news conferences Friday, both campaigns accused the other of overzealous challenges. They held up examples of ballots that have an obvious mark for their candidate and no other disqualifying attributes.

Marc Elias, the lead Franken lawyer, ran through a stack of 10 photocopied ballots from Fillmore County, where Coleman volunteers lodged 27 challenges. Some that included Franken votes on the same ballot as a presidential vote for Republican John McCain were challenged on the basis of "voter intent."

"It must be heartbreaking for the people down there that there are people who voted for John McCain who didn't also want to vote for Norm Coleman," Elias said.

Hours later, Coleman campaign manager Cullen Sheehan addressed reporters in a room where the walls were plastered with more than 50 copied challenged ballots from Meeker County that they called frivolous. Most had Coleman's oval clearly filled in but were flagged anyway.

Sheehan accused Franken's volunteers of making excessive challenges to whittle away the 215-vote lead Coleman held going into the recount. Challenged ballots don't figure into each candidate's vote total as results are reported daily by the secretary of state.

"They need to show from the public perspective that they are gaining momentum and it is not reality," Sheehan said. "It's simply that they're challenging more ballots."

Sheehan and Elias said there have been no formal discussions between the campaigns about steps that could be taken to reduce the pile of disputed ballots that will go to the five-member Canvassing Board for final rulings. But both said they anticipated weak challenges would be pulled by then.