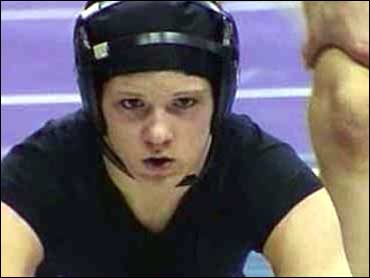 Heather Brown of WCCO in Minneapolis/ St. Paul reports on a high school sophomore girl who won a slot at the state wrestling tournament. She's believed to be the first girl to compete at that level statewide.

Elissa Reinsma is the only sister in a home with three brothers. Her grandfather was a state wrestling champion in Fairbault in 1951. Her brother, Justin, a senior, made his fifth trip to the state tournament this year.

In Wednesday night's match, WCCO's Brown reports Jacoby got the first take-down, which Elissa admitted flustered her a bit. At one point, her forehead began to bleed and the match was halted for a moment. Eventually, the match went all six minutes and ended 9-2 to Jacoby.

Despite the loss, Elissa was upbeat.

"I just wrestled in the state tournament. I'm pretty happy, even though I shouldn't be. Losing the match is not what I planned. He was a really good wrestler, so just gotta be happy," she said.

Here's the WCCO video and story