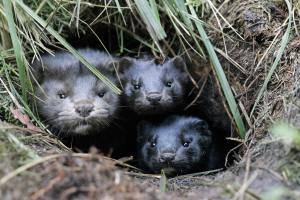 The Animal Liberation Front was claiming responsibility, according to an anonymous statement sent to Bite Back, an animal rights publication based in West Palm Beach, Fla.

A police officer saw a few of the animals on a road early Wednesday, Sept. 25 and contacted the family of 92-year-old George Rykola, who raises mink on a farm in rural Cambria County, police in Cambria Township said.

Someone had gotten on the property and released hundreds of mink from their cages, also destroying some cages and records, Rykola told the Pittsburgh Post-Gazette.

The species developed for the fur industry have no idea how to find food and water, Michael Whelan, executive director of the Fur Commission USA, a mink farm trade organization, told The (Johnstown) Tribune-Democrat.

"These are domestic animals," he said. "They can't survive in the wild."

Animal liberation activists pick this time of year for such actions because winter is approaching and it's time for the pelting season, said Bob Noonan, editor of Maine-based Trapper's Post.

"This is when they can do the most economic harm to the farmers," he said. "They believe it is murder to kill an animal."

Rykola said mink coats aren't worn by many Americans these days, and Greece and China are now his most lucrative markets.

"I don't think a mink farmer is doing anything wrong by pelting," he said. At one time, there were 30-odd mink farmers in the area, but now, there are only four, he said.

Rykola said he and other family members have raised mink on the farm about 90 miles east of Pittsburgh for almost six decades.

Police Chief Mark Westrick estimated that fewer than 500 animals were released, and the majority were recaptured.