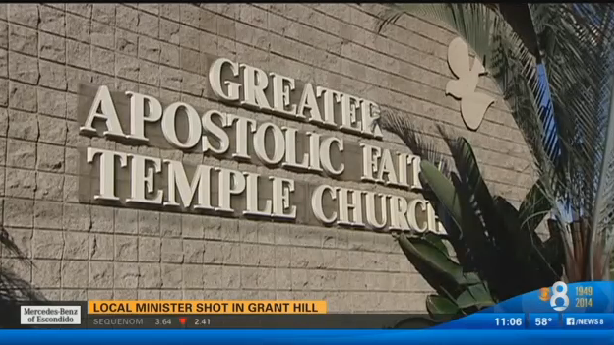 SAN DIEGO, Calif. - A minister sitting in a car in a San Diego church parking lot was grazed in the chest by a bullet that came to rest in his arm, police said Monday morning, reports CBS affiliate KFMB.

The victim was with another minister in a parked car outside Greater Apostolic Faith Temple Church, talking, when a gunman approached on foot and fired four rounds into a passenger side window at around 8 p.m. Sunday, according to San Diego police Office Robert Heims. The victim was sitting in the passenger seat, Heims said.

"One of the bullets grazed the passenger's chest and went into his arm," Heims said. He was expected to survive.

Police described the gunman as a black male, in his 20s, 5 feet, 10 inches tall and 160 pounds, last seen wearing a black baseball cap and black clothing.

The motive for the shooting was under investigation, according to the station.