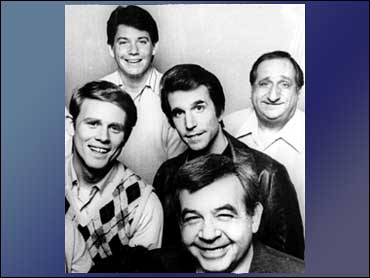 The Fonz in bronze? It could happen.

Visit Milwaukee, a group that promotes the city as a tourism and convention destination, is leading an effort to raise money for a bronze sculpture of the character played by Henry Winkler on TV's "Happy Days," which was set in Milwaukee.

"It's an honor," says Winkler. "But it is so bizarre to think there should be a statue."

"If it helps the city, a city that has been so supportive and warm to me over the years, then I am so OK with it," the 61-year-old actor says.

Visit Milwaukee is confident the statue will be unveiled next year, says Dave Fantle, vice president of public relations for the nonprofit group.

Fantle says the dedication ceremony would draw media attention to Milwaukee, and the sculpture would provide another tourism draw.

"This is a statue of a TV icon who remains the epitome of cool," he said.

Winkler said he would be willing to come to Milwaukee for the statue's dedication.

TV Land, a cable network that airs reruns of vintage shows, has donated six statues commemorating memorable TV events or characters to various cities, starting in 2000 with a statue of Ralph Kramden, Jackie Gleason's character on "The Honeymooners," which was given to the city of New York.

But TV Land isn't planning to donate any more statues and is re-evaluating the program, said network spokeswoman Jennifer Zaldivar.