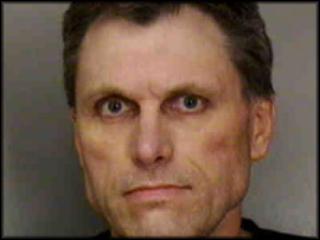 (CBS/WTSP) POLK COUNTY, Fla. - Apparently a Michigan dentist who could easily afford a couple of slices preferred his pizza "with everything."

Richard Ludwig, who bragged his net worth was up to $4 million,  was arrested late Saturday on a host of charges by Florida police who say he stole a college student's credit card and used it to buy pizza.

The 54-year-old Ludwig, of Okemos Mich., was arrested on credit-card theft, forgery and impersonating and attempting to use the ID of another person without consent, reported CBS affiliate WTSP.

Ludwig was in Polk County, Fla. for his son's baseball tournament.

The alleged victim, Harrun Majeed, a military veteran and college student, dropped his credit card in the parking lot of a Publix supermarket. Majeed canceled the card when he got home after realizing he lost it, reported the station.

The representative on the phone told Majeed that someone had used the card to buy pizza in the same plaza where he lost the card. He then proceeded to call the Polk County Sheriff's Office.

The police went to the restaurant and found Lewis waiting for two large pizzas with extra olives. Police say Ludwig had $250 in cash in his pocket, but used Majeed's card to pay the $40.64 bill.

When police asked Ludwig if he was having financial problems he said, "absolutely not." He then told the deputies that his net worth was somewhere between $3 million and $4 million.

"I've been in law enforcement for a long time, but this one takes the cake," said Sheriff Grady Judd told the station. "This is the epitome of arrogance. Dr. Ludwig appears to be an intelligent, successful person who could have bought pizza for everyone in Davenport, but instead he risked his career to steal from a military veteran."