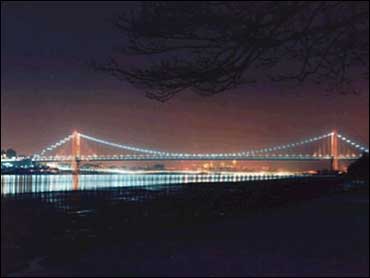 A broken 48-inch underground pipe sent up to 2 million gallons of raw sewage spilling into the Hudson River north of New York City as workers scrambled Saturday to repair the damage.

Westchester County health officials warned boaters, water skiers and skin divers to stay out of the river due to potential health problems presented by the sewage. The pipe broke Friday afternoon, apparently ruptured by a tree that came loose during a landslide near the Greystone Train Station in Yonkers, officials said.

"It's anticipated at this time that it will have minimal impact on the environment," said Maureen Wren, spokeswoman for the state Department of Environmental Conservation. "But we will continue to monitor the situation."

The broken line carries 4 million gallons of sewage daily from Irvington to a pumping station in Yonkers, and Weschester County Health Department spokeswoman Mary Landrigan. As much as 2 million gallons could escape before the line is repaired, she added.

Landrigan said repair crews hoped to fix the breach at some point Saturday. She could not say how far along the Hudson the sewage might spread, but said residents along the river in Westchester and Rockland counties should be aware of the problem.

According to Wren, crews were also using pumps to remove standing sewage in the area around the train station. The Greystone station, on the Hudson Line, is about 18 miles north of Grand Central Terminal.

Service on the Metro-North railroad was not affected by the broken main, and the surrounding neighborhoods were experiencing no problems, said Landrigan.

People who risk contact with the water on the Hudson could end up with gastrointestinal problems, leading health officials to advise people to spend this weekend on land.