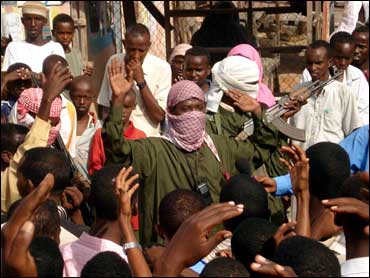 Radical Islamists with alleged links to al Qaeda have regrouped after being driven from power last year and are poised to launch a massive attack against the Somali government, an official said Thursday.

Within hours, mortars slammed into the biggest market in the capital, Mogadishu, killing at least 10 people.

"I saw the dead bodies of at least 10 people, and 10 others were rushed to the hospital," said Muqtar Nor, a Mogadishu resident. It marked the latest bloodshed in a city that is enduring a seething Islamic insurgency.

The government has "no power to resist the Islamists" and is failing to control most of the country, said Sheik Qasim Ibrahim Nur, director of security at the National Security Ministry.

"About 80 percent of Somalia is not safe and is not under control of the government," Nur told The Associated Press in an exclusive interview. "Islamists are planning to launch a massive attack against the (government) and its allied troops."

The comments - a rare acknowledgment by the government that its control is tenuous at best - come amid increasing signs that the Council of Islamic Courts is again gaining power in this Horn of Africa nation.

The group, which controlled the capital and much of southern Somalia for six months, was driven from power last December when Ethiopia sent crucial military reinforcements, including soldiers and fighter jets.

But the Islamists have launched an Iraq-style insurgency, throwing this already beleaguered nation into bloody chaos.

The United Nations says Somalia is facing Africa's biggest humanitarian crisis. Some 6,000 civilians have been killed in the fighting this year alone, a local humanitarian group says.

Somalia has not had a functioning government since warlords overthrew a dictator in 1991, then turned on one another.

The current government, led by President Abdullahi Yusuf, was formed in 2004 with the support of the U.N., but has struggled to assert any real control.