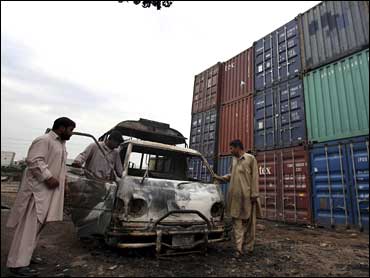 Dozens of suspected militants fired rockets early Saturday at a transport terminal in northwest Pakistan that is used to ship supplies to NATO troops based in Afghanistan, police said.

At least 12 shipping containers were damaged in the attack at the Farhad terminal in Peshawar, capital of troubled North West Frontier Province, local police official Zahur Khan told The Associated Press. He said police opened fire at the insurgents but they managed to flee.

The attack came less than a day after a suicide bomber blew up in a packed mosque in North West Frontier Province's Khyber tribal region, killing 48 people and wounding scores more in the worst attack to hit Pakistan this year.

Afghan-based U.S. and NATO forces get up to 75 percent of their supplies via routes that pass through Khyber and a southwestern Chaman border crossing - areas where Taliban militants are believed to be operating.

The route passes in front of the mosque, where about 200 worshippers were present at the time of the blast.

Shortly after the attack, tribal police detained two suspects who were making a video near the mosque and investigators believed the men were linked to those who orchestrated the bombing, two local security officials said Saturday.

The officials - who spoke on condition of anonymity because they were not authorized to speak to the media - provided no further details and only said the men were still in police custody and being questioned.

Several security officers were also killed in Friday's attack, which came hours before President Barack Obama unveiled a revised strategy to "disrupt, defeat and dismantle" the al Qaeda terrorist organization and the Taliban militants operating in Afghanistan and northwest Pakistan.

Afghan and Pakistani officials praised Mr. Obama's emphasis on civilian aid to their countries, saying it would be an effective way to deal with the growing militant violence. 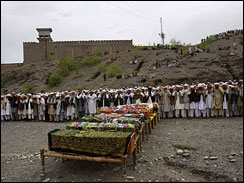 Militants in Pakistan and Afghanistan have often killed scores of Pakistani civilians in attacks. Mosques and funerals have been targeted before, but Friday's blast was seen by many as plumbing new depths of evil.

"What kind of holy war is this? Only poor people have been killed," said Asfandyar Wali, head of the ruling secular party in the northwest. "This is not about implementing Islamic law, this is not about holy war. This is outright insurgency."

Tariq Hayat, the top administrator of the Khyber tribal region, said 48 bodies were found in the rubble, and he predicted the death toll would likely rise. More than 100 people were wounded, medical officials said.

Pakistan has been hit by scores of attacks by al Qaeda and Taliban militants since the Muslim country withdrew its support for the Taliban in Afghanistan after the Sept. 11, 2001, terrorist attacks and supported the U.S.-led invasion of that country.

Until Friday, the deadliest recent attack was in September, when a suicide truck bomb killed at least 54 people and devastated the Marriott Hotel in Islamabad, the capital.

The militants are mostly sheltering in the border region, which Western officials say they use as a base to attack U.S. and NATO soldiers in Afghanistan, where violence is also running at all-time highs. The lawless, mountainous region is believed to be a possible hideout for al Qaeda chief Osama bin Laden.
By Associated Press Writer Riaz Khan; AP writers Asif Shahzad, Ishtiaq Mahsud and Sebastian Abbot contributed to this report