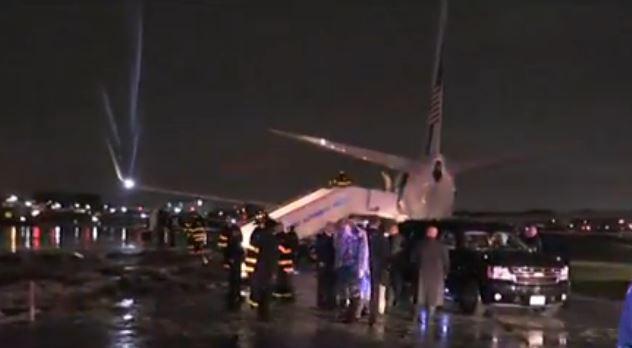 The plane carrying Pence, his family, staffers and members of the press skidded off the runway, according to CBS News campaign reporter Alan He, who said that despite the rough landing, everyone appeared to be okay. Passengers, including the Indiana governor, were evacuated from the plane following the incident.

“We had no idea we had skidded off the runway until Gov. Pence came to the back of the plane and said we may have done that,” He said.

He said he believes about 60 people were on the plane at the time.

Pence came to the back of the plane and checked on everyone after the landing, He said: “He was calm. He came back to check on the press.”

A law enforcement official briefed on the accident told CBS News senior investigative producer Pat Milton it appears a very wet runway contributed to the incident. It was raining in New York when the plane landed and had been for most of the day.

The FAA  said in a statement the Boeing 737 aircraft ran off the end of Runway 22 at LaGuardia Airport after landing at about 7:40 p.m.

The FAA and the NTSB will investigate.

“Mr. Trump did reach out to Governor Pence and is very glad everyone on board the plane is safe,” spokesperson Stephanie Grisham said.

Trump later elaborated during a rally in Ohio.

“You know he was in a big accident with a plane,” Trump said. “The plane skidded off the runway and was pretty close to grave, grave danger, but I spoke to Mike Pence and he’s fine.”

Democratic presidential candidate Hillary Clinton tweeted that she was “glad to hear” Pence, his staff, Secret Service, and the crew were all safe.

LaGuardia Airport was closed following the incident, but has since reopened, the FAA said.

“One of LaGuardia’s two runways has reopened for arriving and departing flights, following tonight’s incident in which a plane overshot the runway,” Port Authority said in statement.

Pence took to Twitter to thank first responders Thursday night. He said he will be back on the trail tomorrow.

Pence arrived in New York Thursday for a fundraiser, following a rally at Iowa Central Community College. Friday afternoon, he is expected to hold a rally at TC Millwork, Inc., in Bensalem, Pennsylvania, before heading to Smithfield, North Carolina.

Campaign spokesman Marc Loetter told reporters that Pence had missed the fundraiser and was headed to his hotel for the night, the Associated Press reported.