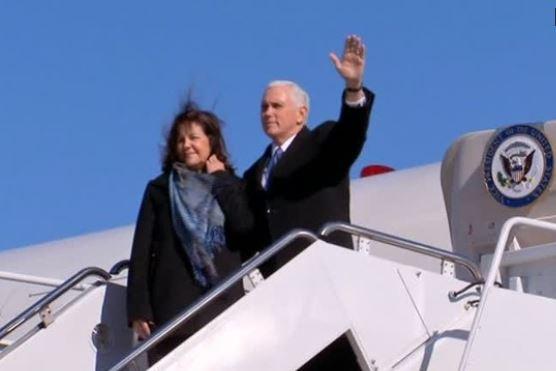 JOINT BASE ELMENDORF-RICHARDSON, Alaska -- Vice President Mike Pence's six-day swing through Asia, anchored by a stop at the Winter Olympics in South Korea, is set to focus less on sports than the host country's bellicose neighbor to the North.

Pence departed Monday for Alaska, Japan, and South Korea, aiming to ensure North Korea doesn't "hijack" the games as it participates on a joint team with the South, in the view of the White House. He'll hold symbolic events of his own to highlight the North's human rights abuses and nuclear ambitions, according to White House officials who spoke on condition of anonymity because they were not authorized to preview the trip publicly.

"We'll be telling the truth about North Korea at every stop," Pence told reporters after touring missile defense facilities Monday that monitor and could respond to a launch by the North. "We'll be ensuring that whatever cooperation that's existing between North and South Korea today on Olympic teams does not cloud the reality of a regime that must continue to be isolated by the world community."

In Japan, he will meet with Prime Minster Shinzo Abe and U.S. service members. In Korea, Pence will visit a memorial to the 46 South Korean sailors killed in a 2010 torpedo attack attributed to the North, and hold meetings with President Moon Jae-in.

"Missile defense is essential to our national defense," Pence said before a briefing with U.S. Northern Command at Joint Base Elmendorf-Richardson in Anchorage, Alaska. He touted the coming deployment of an additional 20 ground-based interceptors that would respond to an enemy launch.

Leading the U.S. delegation to the Olympic Opening Ceremonies, Pence will bring to the games Fred Warmbier, the father of Otto Warmbier, the U.S. student who died in 2017 shortly after he was released from North Korean detention.

"He & his wife remind the world of the atrocities happening in N Korea," Pence tweeted Monday before departing Washington.

Echoing Secretary of State Rex Tillerson's remarks the previous day, Pence did not rule out the possibility of meeting with the North Korean delegation during the trip.

"Let me say President Trump has said he always believes in talking, but I haven't requested any meeting," Pence said. "But we'll see what happens."

North Korea is sending its nominal head of state, Kim Jong Nam- the highest-level visitor to the south from the North in recent memory.

Pence said his message, if he met any officials from the North, would be the same as it has been in public. "And that is that North Korea must once and for all abandon its nuclear weapons program and ballistic missile ambitions," he said.

The trip comes after President Donald Trump hosted a group of North Korean defectors in the Oval Office on Friday, including Ji Seong-ho, whom the president referenced in his State of the Union address last week. The White House cast the meeting as part of the Trump administration's "maximum pressure" campaign to counter the North Korean nuclear program. The plan centers around rallying the international community to further isolate North Korea both diplomatically and economically.

White House officials said Pence was expected to continue to bring attention to North Korea's human rights abuses on the trip, and offer of reminder of grim conditions in North Korea.

On Sunday, the North Korean government shot back that its nuclear missile program would "deter Trump and his lackeys from showing off on the Korean peninsula."

"If Trump does not get rid of his anachronistic and dogmatic way of thinking, it will only bring about the consequence of further endangering security and future of the United States," the government said in comments carried by the North's official Korean Central News Agency.

Trump and other senior officials have repeatedly said that time is running out before North Korea gains the capability to strike the U.S. mainland with a nuclear-tipped intercontinental ballistic missile. The isolated country has proven it can launch missiles of sufficient range, but has yet to develop a vehicle that can withstand the hazards of atmospheric re-entry.