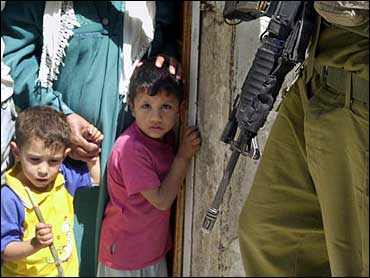 A Palestinian infant was killed by Israeli army fire in the Gaza Strip on Wednesday, as the Palestinian prime minister flatly rejected Israel's new condition for peace talks.

A disagreement over the fate of Palestinian refugees raises doubts about whether a U.S.-backed "road map" for peace can be implemented. Israel now insists the Palestinians scrap a demand for the "right of return" of refugees without further discussion, even though the peace plan stipulates the issue is a subject for future negotiations.

In the Gaza town of Khan Younis, 1-year-old Alian Bashiti was shot in the head and later died at a hospital, doctors said. Palestinians said Israeli soldiers fired at a neighborhood in Khan Younis and the boy was in his house when he was hit.

Army spokesman Jacob Dalal said soldiers at an outpost guarding Israeli settlements came under fire from Palestinians and shot back. Dalal could not independently confirm the baby's death.

Also Wednesday, a Hamas fugitive was killed in an explosion in a house in Zawata, a village near the West Bank city of Nablus. Hamas blamed Israel, but local firefighters said the blast happened inside the house, ruling out an Israeli attack.

Israel has killed dozens of suspected militants in targeted attacks in the past 31 months of fighting. However, a number of militants also died while handling explosives that went off prematurely.

Meanwhile, disagreements continued to plague the new "road map," which is a three-stage plan envisioning the start of talks on a final peace deal in the last phase. Among the issues to be discussed are borders of a Palestinian state, the fate of refugees, the status of Jerusalem and the future of Jewish settlements.

Israeli Prime Minister Ariel Sharon said Tuesday that the Palestinians must renounce the "right of return" of refugees and their descendants - about 4 million people - to their former homes in what is now Israel.

Sharon called the prospect of hundreds of thousands of Arabs entering the Jewish state "a recipe for the destruction of Israel."

Israeli officials said the renunciation must come before the second stage, in which a provisional Palestinian state in temporary borders would be set up.

But in an interview broadcast late Tuesday on Palestine television, new Prime Minister Mahmoud Abbas said he could not drop the Palestinian demand.

Abbas, a refugee himself, said, "The refugees issue is for the final status. Keep it there and we will discuss it.

"Why would I drop the right of return for refugees? It is not my right to drop it."

Abbas said Israel is holding up progress toward peace by failing to accept the plan.

"From the beginning there is a big question mark on the road map because Israel doesn't want to implement it," he said.

Abbas, one of the first Palestinian leaders to speak out against the violent aspects of the Palestinian uprising, repeated his opposition to armed attacks.

"We want to stop it. We need a calming period for our people to allow them to rebuild what was destroyed," he said, referring to Israeli strikes in response to Palestinian attacks.

Palestinian officials say a dialogue between Fatah, the mainstream group headed by Palestinian leader Yasser Arafat and Abbas, and militant groups like Hamas and Islamic Jihad will resume in Cairo in the coming days.

The goal is to agree on a halt to attacks. Earlier rounds failed. Officials said there have been no contacts since Abbas visited Gaza last month before setting up his Cabinet.

Also, a Fatah official said Abbas settled a dispute with Fatah over the responsibilities of Mohammed Dahlan, a former Gaza strongman appointed junior minister in charge of security.

Abbas had said he was turning over his responsibilities as interior minister to Dahlan, upsetting Fatah leaders, who objected to naming him minister. Abbas then clarified he would retain the interior portfolio and seek Cabinet approval for Dahlan's powers, the official said on condition of anonymity.