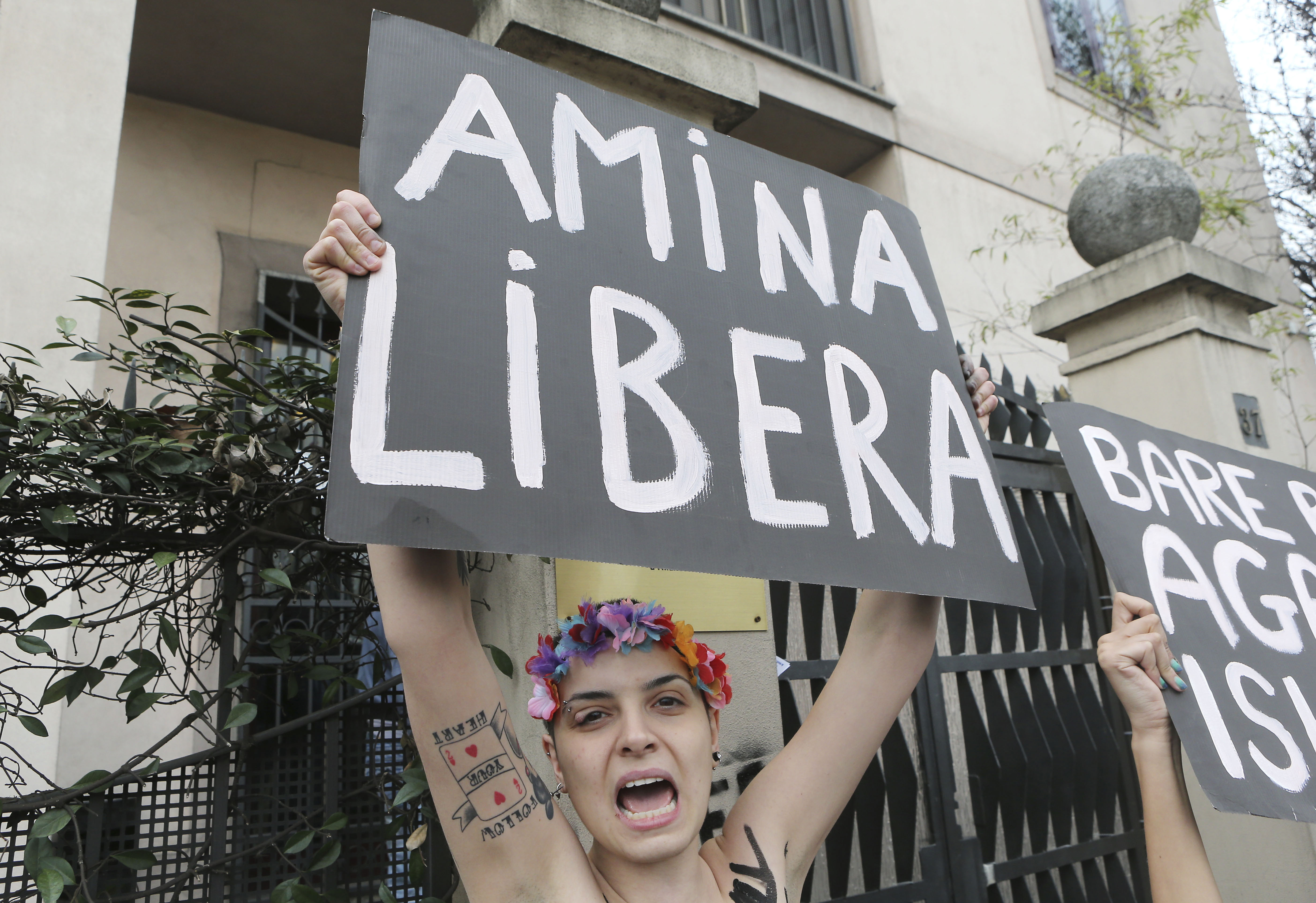 RABAT, Morocco Bewilderment, scorn, resentment. Women's rights activists across the Middle East are reacting with everything but joy to topless demonstrations in Europe by a Ukrainian feminist group held in solidarity with a Tunisian woman who posted topless photos of herself protesting religious oppression.

They fear the bare breasts may hurt their cause more than help it, after FEMEN activists protested in front of mosques and Tunisian diplomatic missions last week to support 19-year-old Amina Tyler, who caused a scandal in her country with her Facebook postings.

Tyler herself, a high school student, said that while she was encouraged by the solidarity, the burning of the black flag bearing the Muslim profession of faith in front of the Paris mosque was a step too far, even if the banner has been championed by ultraconservatives and jihadists.

"I am against that," she told French TV Canal+ on Saturday. "They didn't insult a certain kind of Muslim, the extremists, but all Muslims."

Tyler, who has described herself as a FEMEN member, said she now fears for her life in Tunisia after ultraconservative Muslim clerics recommended she be stoned to death for posting the photos. She said she wants to move abroad. Tunisia is one of the most liberal countries in the region, but her protest has shocked even mainstream society in her homeland, still conservative about nudity.

A healthy debate about women's rights rages in Tunisia. But most women in the country feel that Tyler was out of line, even as they express concerns about the rolling back of progressive legislation on women and the rise of the conservative Salafi movement in Tunisia since the overthrow of the secular dictatorship in 2011.

When Tyler's photos were followed with the FEMEN solidarity protests, largely by European women, in Milan, Paris, Berlin and elsewhere, Tunisian women also felt as if foreigners were judging Islam.

"All organizations and all ideological currents are unanimous that this phenomenon is foreign to our society," said Imen Triqui of the Tunisian Association of Liberty and Equality, while supporting Tyler's freedom of expression.

In November 2011, a young Egyptian woman, Aliaa ElMahdy, posted pictures of herself wearing only stockings on her blog to denounce a society of "violence, racism, sexism, sexual harassment and hypocrisy." At the time, Egyptian feminists and secular activists expressed fear that the move would set back secular and liberal trends ahead of legislative elections, later won in a landslide by religious conservatives.

Across the region, Tyler's photos sparked debate among women activists who didn't want to limit freedom of expression, but felt that such protests should take other forms.

Jenan Mubarak, of Iraq's Center for Women's Rehabilitation and Employment, endorsed Amina's right to protest, but argued that topless demonstrations were counterproductive to promoting women's rights.

"I reject the idea that a woman's body is used to reach any objective," she said. "I want others to appreciate my mind, the way I speak, to respect the way I am trying to gain my rights."

Shatha al-Janabi, an Iraqi writer and feminist, echoed that view.

"Every woman has the right to express what is inside her. Women have genuine demands, particularly Arab women, because the patriarchy is so, so strong," she said. "But there are many ways to demand equality in a Middle Eastern society. Nudity isn't acceptable here."

"Exposing the woman's body ... reinforces the image that objectifies women actually, no matter how FEMEN would like to think that the action frees them somehow," she said. "I tell FEMEN, `call me when exposing your breasts gets you to break the glass ceiling.' And if it does, then it's probably for the wrong reasons."

But FEMEN members ask: Would anybody have paid heed to the FEMEN message in the Middle East had the protests been fully clothed?

"I don't think if we did it with clothes on, people would pay attention to the message — it gets more attention if were are semi-nude," said Meriam, a Tunisian member of FEMEN living in Paris who asked that her last name not be used to protect her safety.

She expressed no regret for burning the flag since it is closely associated with the jihadists and Salafis who have been the most vocal in the region about repressing women.

"For me this flag is not the Muslim flag," she said by telephone from Paris. "It never hung in mosques, just in the hands of Bin Laden and his colleagues."