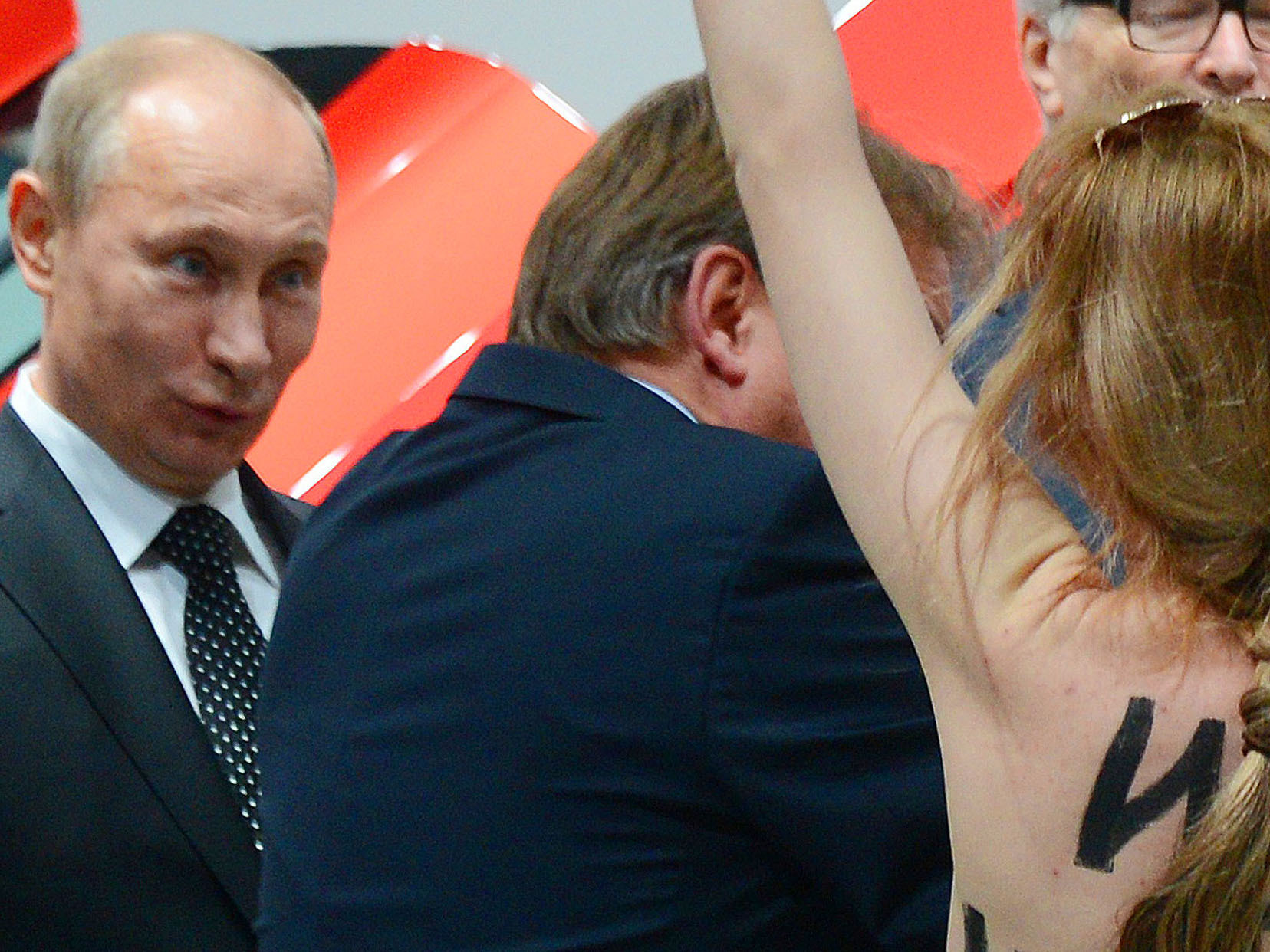 HANNOVER, Germany German Chancellor Angela Merkel confronted Russian President Vladimir Putin with her concerns about a crackdown on non-governmental organizations - and then topless demonstrators with obscene insults written on their chests assailed the Russian president at an industry fair in Germany.

As the two leaders toured the fair in Hannover, several activists from Ukraine's Femen group, bared their torsos and shouted "Putin dictator!" before being detained by guards.

A smiling Putin shrugged off the protest.

"As for the action, I liked it," he said. "You should be grateful to the girls, they are helping you make the fair more popular."

Merkel was not amused. "Whether one has to resort to such an emergency measure in Germany and can't say one's piece some other way, I have my doubts," she said.

After getting an earful from Merkel on the importance of democratic issues, Putin arrived in Amsterdam on Monday to face an eyeful of protests from gay rights activists.

Rainbow flags were flying at half-staff around the Dutch city and rights groups planned a major protest against Russian gay rights policies.

In January, Russian lawmakers tentatively approved a bill that makes gay public events and the dissemination of information about the lesbian, gay, bisexual and transgender community to minors punishable by fines of up to $16,000. It still requires final approval by parliament and would have to be signed by Putin to become law.

Putin's visit aims to showcase growing economic ties between the two countries. With $83 billion in bilateral trade last year, the Netherlands outpaced Germany to become Russia's No. 1 trading partner in Europe and its second biggest partner in the world after China.

Putin is also widely expected to announce a deal between Gazprom and Royal Dutch Shell PLC on developing gas fields above the Arctic circle in Siberia.

Amsterdam deputy mayor AndrÃ©e van Es said the city appreciates the importance of trade and was glad to host Putin, but it was also supporting the protests with a rainbow flag outside city hall.

In 2001, the Netherlands became the first country in the world to legalize gay marriage.

Authors of the bill, which is backed by the Kremlin's dominant United Russia party, say minors need to be protected from "homosexual propaganda" because they are unable to critically assess the information. Critics say the legislation contradicts Russia's international obligations and is part of the Kremlin crackdown on minority groups and critics.

"A lot of people are worried about human rights in Russia in general, but focus is very much on gay rights because of that bill," Van Es said.

Outside the Hermitage Museum in Amsterdam, where Putin is to meet the Netherlands' Queen Beatrix and Prime Minister Mark Rutte, activists from Amnesty International hung signs satirizing Russian policy.

"No gay rights propaganda beyond this point," read one poster. "Do not frighten President Putin: keep this area human rights free," read another.

The activists also used fake police tape to block off access to the museum, with the message "critical journalists not allowed."

The Hermitage, a satellite of Russia's Hermitage Museum in St. Petersburg, is located on the Amstel River - just a stone's throw from Amsterdam City Hall. It was not clear whether authorities would allow the signs directly in front of the museum to remain during Putin's visit; others are hanging from residential windows across the river.

Putin's trip was timed to kick off a year of cultural exchanges. He and Queen Beatrix are to visit an exhibition in the Hermitage dedicated to Peter the Great, the Russian czar who founded St. Petersburg and sought to open up closer ties with Europe.

Putin arrived in Amsterdam in the afternoon after spending the morning with Merkel at an industry fair in Hannover, where she confronted him about Russia's crackdown on nongovernmental organizations.

"A lively civil society can only develop if individual organizations can work without fear and worry," Merkel said at a joint news conference with Putin.

Putin brushed the issue aside by saying his government just wants to know who is funding the groups.

Leading Russian NGOs have pledged to boycott a bill that requires them to register as "foreign agents." Putin has responded by ordering wide-ranging checks of up to 2,000 NGOs across the country.

"We aren't trying to put anyone under control, but we want to know how much money, through what channels and for what purpose, is being sent," Putin said. "Russia has passed a law on that and everyone will obey it."

He said NGOs in Russia had received nearly $1 billion from abroad.

"Maybe this money, which is quite a bit - a billion - could have been sent to help Cyprus and then it wouldn't have been necessary to fleece unfortunate depositors," Putin commented, referring to the European Union's complicated bailout for the island nation in which Russian depositors are expected to lose significant funds.