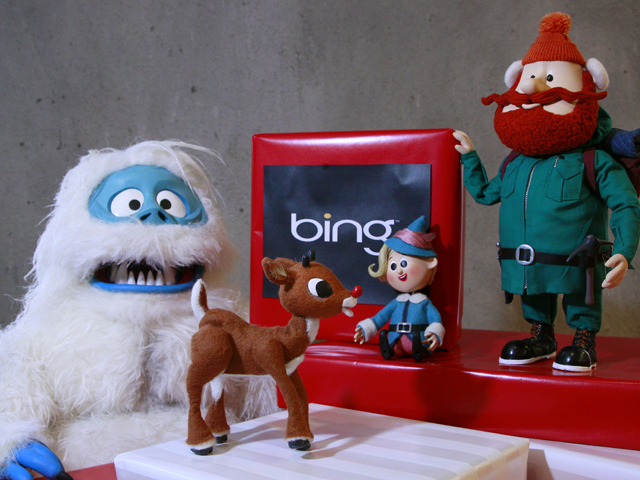 SAN FRANCISCO - Like Santa Claus on that one foggy Christmas Eve, Microsoft has summoned Rudolph the Red-Nosed Reindeer to guide some precious cargo - a holiday marketing campaign for its Bing search engine.

The advertisements, debuting online and on TV this week, star Rudolph and other characters from the animated story about the most famous reindeer of all. The campaign is part of Microsoft's attempt to trip up Google Inc., an Internet search rival as imposing as the Abominable Snowman was before Yukon Cornelius tamed the monster. Google has been countering with its own emotional ads throughout the year. Most of Google's ads show snippets of its dominant search engine and other products at work before swirling into the logo of the company's Chrome Web browser.

The dueling ads underscore the lucrative nature of search engines. Although visitors pay nothing to use them, search engines generate billions of dollars a year in revenue from ads posted alongside the search results.

The holiday season is a particularly opportune time for search companies because that's when people do more searches - to find gifts online, look for party supplies and plan nights out on the town. That means more people to show ads to. Advertisers also tend to be willing to pay more per ad because they know people are in a buying mode.

To capture that audience, Microsoft and Google are both thinking outside the search box to promote their brands. Although the text ads running alongside search results do a fine job of reeling in some customers, they still lack the broader, more visceral impact of a well-done television commercial, said Peter Daboll, chief executive of Ace Metrix, a firm that rates the effectiveness of ads.

"It's instructive that these companies who are all about the Internet and doing things in real time are actually doing these emotive ads on TV," Daboll said.

Search engines are particularly difficult to sell because the sophisticated technology required to make them work isn't something "you can touch or feel in a store, so you need to bring some emotion to it," said Sean Carver, Bing's advertising director. "The storytelling is important."

Microsoft Corp. licensed the rights to the characters from Rudolph's 47-year-old holiday special after convincing their owners that the Bing commercials would add an endearing chapter to the reindeer's story. The rights to Rudolph and the rest of the cast are owned by the children of Robert L. May, who wrote the story in 1939 while working as a copywriter at the Montgomery Ward department store (May's brother-in-law, Johnny Marks, later wrote the famous song).

Microsoft is far more experienced at marketing than Google. For one thing, it's 23 years older than Google, which was founded in 1998.

More important, Google co-founders Larry Page and Sergey Brin were so contemptuous of traditional marketing campaigns that the company never bothered to advertise its search engine on national TV until the 2010 Super Bowl. Spending millions to be a part of TV's annual advertising extravaganza was so out of character that Eric Schmidt, Google's CEO at the time, heralded the Super Bowl ad with a post on Twitter that concluded "hell has indeed frozen over."

Since that breakthrough, Google has caught the advertising bug. Without breaking down its total ad budget, Google disclosed that it has spent $583 million more on television and other advertising during the first nine months of this year than it did at the same time last year.

The investment has won Google some respect in the advertising industry. Google took five of the 10 top spots for most effective national TV ads that promote websites, based on Ace Metrix's study of viewer reactions to the commercials. Topping the list is an ad showing how a father used Google services such as Gmail to create an electronic journal of his daughter Sophie's life. Three Bing ads also ranked in the 10 most effective, but it also had two ads on the least effective list.

"There doesn't seem to be a very coherent creative pattern to the Bing ads," Daboll said. "It's kind of hit and miss."

There's no mistaking the common theme in the four Rudolph ads produced for the Bing promotion. The ads are all done in the same stop-motion puppet animation used in the original 1964 TV special. One features Bumble the Abominable Snowman using Bing to get ideas for a more fearsome roar. Another shows some of the characters turning to Bing for suggestions on a vacation that leads to a getaway on an island of misfit toys.

Microsoft has bought seven slots on national TV to run those four 30-second ads. The company is going for high impact rather than high frequency and is placing those ads during holiday-themed specials, starting with "The Simpsons" on the Fox network on Thanksgiving night and ending on Dec. 21 during "South Park" on the Comedy Channel. Microsoft isn't buying time during the Rudolph special, though, which CBS is broadcasting next Tuesday and Dec. 10.

The ads also will be shown in more than 200 movie theaters before holiday films and will be available online beginning Wednesday at http://www.bingoriginals.com .

Microsoft declined to say how much it's spending on the Rudolph campaign.

Aaron Lilly, a Microsoft executive who helps conceive Bing's promotions, came up with the idea to build holiday ads around the Rudolph story two years ago. It didn't happen then because the Aflac insurance company had already bought licensing rights to the characters for that holiday season. The ads will be a success for Microsoft if they help the company gain more ground and cut its losses in Internet search, an area that remains weak for Microsoft even after years of investing in better technology.

While the Xbox video game console and familiar software such as Windows and Office provide most of Microsoft's earnings, Bing remains a financial drain. The online division anchored by Bing has suffered operating losses totaling $7 billion since June 2008, when Microsoft introduced the latest overhaul of its search engine. Google's share of the Internet search market has increased since Bing's debut, according to the research firm comScore. Google now processes about two out of three search requests in the U.S. and rakes in an even larger share of the revenue that rolls when people click on ads next to search results.

Bing's market share has climbed from about 9 percent in June 2008 to roughly 15 percent in October, but most of those gains have come at the expense of Yahoo Inc., which hired Microsoft to run most of its search technology two years ago.

For Google, the ads are aimed at not only maintaining its dominance in search but also driving adoption of other Google products, including its Chrome browser. Google says Chrome now has 200 million users worldwide, up from about 120 million at the end of last year. Despite those gains, Chrome still trails Microsoft's Internet Explorer and the Mozilla's Firefox.

But Chrome has been able to narrow the gap separating it from Internet Explorer more than Bing has been able to do in its pursuit of Google in search. Bing is still hoping to emulate Rudolph, a one-time laughingstock who overcame the skeptics to leap of the front of the pack.