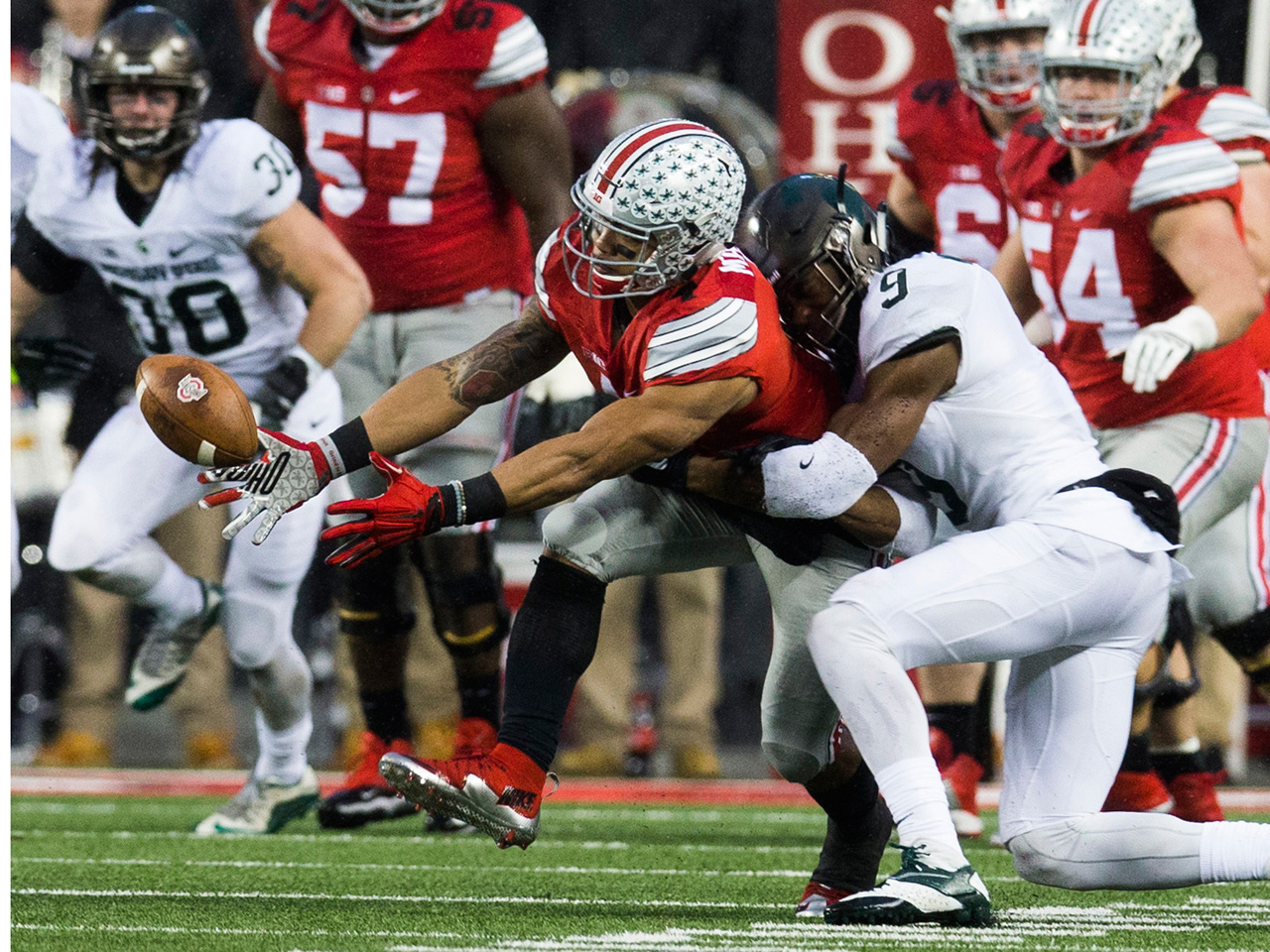 The Spartans (10-1, 6-1 Big Ten, No. 9 CFP) took control of the Big Ten East, jumped into the thick of the College Football Playoff race and very likely ended the Buckeyes' chances to repeat as national champions.

Ohio State (10-1, 6-1, No. 3 CFP) managed just 132 yards against a rugged defense and lost for the first time to a Big Ten team in the regular season since Urban Meyer became coach four seasons ago. The Rose Bowl might be the best that the Buckeyes can do now.

Without Cook, the Spartans completed one pass in the second half, but they gave Geiger a chance to win it with 3 seconds left and the 5-foot-8 junior curved it through.

In addition to the devastating loss, the Buckeyes appear to have lost two key junior starters next year. Running back Ezekiel Elliott gave an emotional press conference after the game, both announcing his intention to leave the school next year, and slamming the team's coaching, reports CBS affiliate WBNS in Columbus.

Additionally, quarterback Cardale Jones tweeted that he would not be returning.

Down 30-13 in the fourth quarter, TCU had a chance to tie after Kohlhausen's 14-yard touchdown pass to Emanuel Porter with 51 seconds remaining. Instead, the Horned Frogs went for the win by attempting the 2-point conversion, but were turned away by Parker.

Samaje Perine ran for 188 yards and a touchdown and Heisman Trophy contender Baker Mayfield completed 9 of 20 passes for 127 yards and two touchdowns for Oklahoma (10-1, 7-1 Big 12, No. 7 CFP) before leaving with an apparent head injury after the first half.

Without offensive stars Trevone Boykin and Josh Doctson, the Horned Frogs (9-2, 6-2, No. 18 CFP) turned the ball over four times, leading to 24 Oklahoma points.

Baylor quarterback Jarrett Stidham took several hard hits in the first half and did not play after the break. Original starter Seth Russell is out for the season after he fractured a bone in his neck.

The Bears still gained 700 yards. KD Cannon caught five passes for 210 yards to help the Bears bounce back from a 44-34 loss to Oklahoma last week.

Mason Rudolph passed for 430 yards and three touchdowns, and James Washington and Jalen McCleskey each caught two touchdown passes for the Cowboys.

CLEMSON, S.C. - Deshaun Watson threw three touchdown passes and ran for a another score, and Clemson topped 500 yards of offense for the seventh straight game.

Watson started the scoring with a 3-yard run, then connected on TD passes of 44 yards to Charone Peake, 11 yards to Deon Cain and 47 yards to Germone Hopper. The Tigers (11-0, 8-0 Atlantic Coast Conference. No. 1 CFP) gained 506 yards against a defense that held Notre Dame to 282 yards last season.

Fans rushed the field and fireworks went off as the Tigers finished off their first 8-0 ACC season. It was the Tigers' 14th straight victory, one shy of tying their record run, and the 700th in program history. Clemson will close regular season next week against rival South Carolina.

The Crimson Tide (10-1, No. 2 CFP) led 49-0 by halftime against the Buccaneers (9-2), who are bound for the FCS playoffs. Alabama is hoping to join them in the FBS version and can clinch an SEC West title with a victory next week at Auburn.

Jones scored on returns of 43 and 72 yards. He's the only Alabama player to score twice on punt returns, according to school records dating to 1944. He's also the first Tide player to have touchdowns on punt returns in consecutive games.

Henry tied Trent Richardson's Alabama single-season record of 21 touchdowns before sitting out the second half. He had nine carries for 68 yards.

Taking over the ballpark of the Boston Red Sox for a far-flung home game, the Fighting Irish (10-1, No. 4 CFP) won their sixth straight game since a two-point loss to top-ranked Clemson.

Quarterback Jeff Smith ran for 100 yards for Boston College (3-8), breaking free for an 80-yard run to make it 19-9 with about 10 minutes to play. His 3-yard TD pass made it 19-16 with 54 seconds left. The Eagles attempted an onside kick, but Irish safety Matthias Farley fell on the ball.

Iowa won the outright West title when Northwestern won at Wisconsin. The Hawkeyes will play at Nebraska next week in search of their first 12-0 regular season.

Purdue cut it 20-13 in the third quarter, but Beathard's 22-yard touchdown pass to Henry Krieger-Coble with 8:40 left sealed yet another victory for the Hawkeyes.

The Gators (10-1, No. 8 CFP) were favored by more than 30 points, but were sluggish the whole game. In overtime, Florida scored on its third play but the extra point attempt was blocked.

Florida Atlantic (2-9) had a first-and-goal at the 9. A sack and three incompletions in the end zone ended the Owls' upset bid.

The shaky win enabled Jim McElwain to become the first Florida coach to win 10 games in his first season with the school.

The Tar Heels (10-1, 7-0 Atlantic Coast Conference, No. 17 CFP) won their 10th in a row and wrapped up the Coastal Division title after blowing a 14-point lead in the final 3 minutes of regulation.

Virginia Tech (5-6, 3-4) tied it on Michael Brewer's 4-yard, fourth-down pass to Isaiah Ford with 1:07 remaining, but the Hokies had to settle for a field goal to begin the overtime.

The Huskies held the previously unbeaten Cougars to 318 yards of offense, almost 200 below their season average. Houston quarterback Kyle Postma, playing in place of Heisman hopeful Greg Ward Jr., threw for 185 yards and a touchdown. Ward came in during Houston's last drive, but had a pass intercepted by Jamar Summers, and Connecticut (6-5, 4-3 American Athletic Conference) ran out the clock.

Rudock was 25 of 38 and connected with Jake Butt and Amara Darboh for touchdowns. Sione Houma and De'Veon Smith ran for touchdowns for the Wolverines (9-2, 6-1 Big Ten, No. 12 CFP).

Rudock connected with Butt on a 26-yard pass to open the scoring and hit Darboh on an 11-yard route in the second quarter. Christian Hackenberg passed for 137 yards for Penn State (7-4, 4-3).

Maguire was 12 of 17 for 152 yards in two-plus quarters, while Cook had 15 carries for 106 yards in a game that was more like a warmup for the Seminoles' game next week against No. 8 Florida.

Florida State (9-2, No. 14 CFP) scored on eight straight drives against Chattanooga (8-3), a team that has clinched a spot in the Football Championship Subdivision playoffs.

SALT LAKE CITY - Josh Rosen threw for 220 yards and a touchdown and UCLA beat Utah to move a game closer to the Pac-12 championship game.

Rosen completed 15 of 30 passes, Paul Perkins ran for 98 yards and a touchdown, and Jordan Payton had a 105 yards receiving yards.

TULSA, Okla. - Quarterback Keenan Reynolds ran for 81 yards and a touchdown while directing a Navy offense that rolled up 512 yards.

Reynolds, who also threw for a touchdown, became Navy's career rushing leader with 4,195 yards, breaking Napoleon McCallum's record of 4,179 yards. He has 82 career touchdowns, one behind the career NCAA touchdown record of 83 set by Wisconsin's Montee Ball.

MADISON, Wis. - Justin Jackson ran for 139 yards and a touchdown, and Northwestern used a goal-line stand to hold off Wisconsin.

Joel Stave drove the Badgers from the 26 to the Northwestern 1. But Stave was forced to leave before Wisconsin's final play from scrimmage after getting hurt on a sack. Bart Houston's pass to the end zone sailed just out of reach of Tanner McEvoy on fourth-and goal from the 11 with 2 seconds left.

The Ducks (8-3, 6-2 Pac-12, No. 23 CFP) have not dropped a game since Adams returned from a finger injury he sustained in the season opener against Eastern Washington. It was the third game since coming back that he's thrown for 300 or more yards and at least four scores.

Royce Freeman rushed for 147 yards in his seventh straight game going above the 100-yard mark.