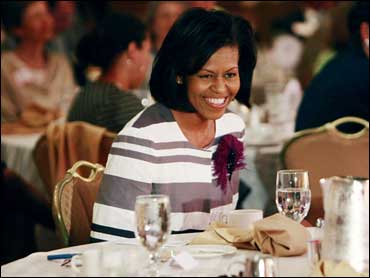 Michelle Obama on Friday drew from her experience as a working mother to emphasize the importance of fairness in the workplace and her support for family friendly policies.

"It's time for the leaders of this country not only to champion these causes, but to fight for the issues every single day," Obama told about 1,000 people at the National Partnership for Women and Families' annual luncheon.

The nonprofit group advocates for equality in the workplace, access to health care and policies that help Americans balance work and family.

Obama, wife of Democratic presidential candidate Barack Obama, said the group's work "is a cause that I carry deep in my heart. It's a cause that I have championed and will continue to champion no matter what the outcome of this election."

She spoke for about seven minutes, reading from notes. The crowd applauded and gave her three standing ovations - when she entered the banquet room, when she approached the microphone to speak and when she concluded her remarks.

Obama relayed struggles she has heard on the campaign trail from working mothers who were nervous about taking time off, and from women whose male counterparts at the office earn more.

"And believe me, when we're paid less, we know," she said, drawing laughter from the crowd.

Obama, 44, has worked as a lawyer and a hospital executive in Chicago. She left her job to help on her husband's campaign. They have two daughters, Malia, 9, and Sasha, 7.

She said she would always be a working mother.

"I used to get up in the morning and go to an office. Now I get up and go to a plane. ... My kids still don't care where I am," she said. "They've always known two parents to work in the household and as long as we're back in time for bedtime, they could care less where we are."