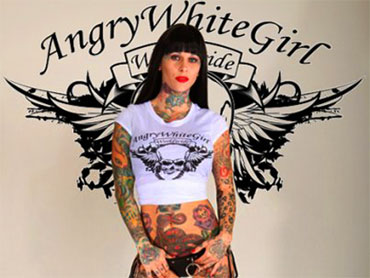 Michelle "Bombshell" McGee has been dumped...not necessarily by Sandra Bullock's husband Jesse James, but by a wild sounding clothing line she has been promoting.

Jimmy Ferrari, owner of Angry White Boy Clothing says despite huge traffic to his Web site generated from McGee's claim that she had an 11-month sexual affair with James, Ferrari has dumped McGee because rumors tying McGee to white supremacist ideology have now tainted his company.

"I don't think it's so right that she is getting so destroyed in the media," he tells CBS News. "But I can't be associated with any white supremacy nonsense."

The clothing "has nothing to do with white supremacy or racism," he says. "It just personifies me."

As for McGee's homepage, it's not clear if the site has been changed or is having technical problems. A blog, which was once active with racy photos of McGee, is now only a dead link. Her MySpace profile is still up, but has gone private.

In the images, shot more than a year ago, a bikini clad McGee is seen licking a dagger and holding a massive gun. She is wearing a Nazi armband and hat and standing in front of a swastika back drop.

McGee's ex-husband alleges that McGee has a swastika tattooed on her stomach; however, CBS has seen many photos of McGee and has not seen a swastika there.

McGee does have a tattoo of a "W" on one leg and a "P" on the other, which TMZ reported stands for white power. McGee told In Touch that it stood for something sexually vulgar, but had nothing to do with white power or racism.

So how did Ferrari get tangled in McGee's scandalous web? According to Ferrari, he discovered McGee when he stumbled upon her MySpace profile.

"I never met her face to face. I live on East Coast. I have only been dealing with her for six months," Ferrari insisted. "I heard about her, had seen her pictures. I am into tattoos. She was on the cover of a tattoo magazine."

Ferrari sent her a message inquiring about what it would it take for her to model for his clothing line. "Just a little compensation and I'm all yours," McGee reportedly told Ferrari.

Ferrari gave her free clothing and then designed a hoodie for her. Days later, McGee told In Touch she had a blistering sexual affair with James while Bullock was busying filming her Oscar-winning role in "The Blind Side."

Overnight, McGee, a little known tattoo fetish model and San Diego-based stripper, turned into a sensation. "I got lucky. Who the hell ever heard of Angry White Girl Clothing," Ferrari told CBS News.

But the attention hasn't turned into sales. The one-man company has sold only 12 shirts since the scandal broke and since McGee's Nazi photo shoot surfaced the coverage has turned negative.

"They find this Nazi armband thing. I have a politically incorrect clothing line. It's totally misconceived," he explained. "Now with all this media firestorm, it's like swimming up the storm... she will never model for me again."

Meanwhile, James issued an apology for his poor behavior without specifics and People has reported that Bullock moved out of the house shortly after winning her Oscar.