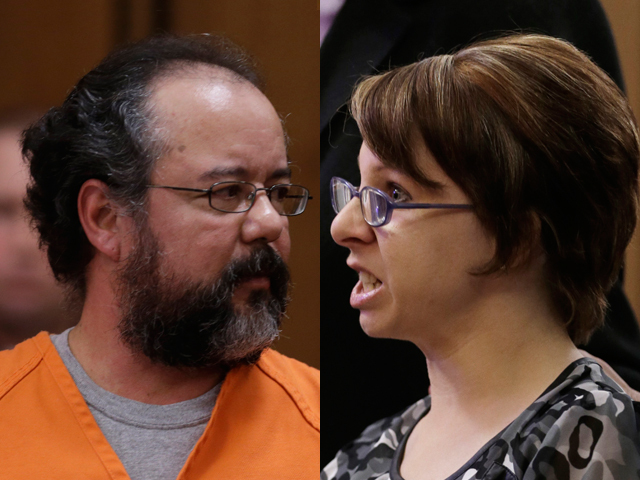 (CBS) -- Cleveland kidnapper Ariel Castro was spared the death penalty when he pleaded guilty July 26 to more than 900 counts including kidnapping, torture and rape for imprisoning three women in his home for about a decade.

Addressing her captor in court during his sentencing hearing Thursday, one of his victims said capital punishment would have been "so much easier" than a life sentence for the 53-year-old, who staunchly denied in court that he ever raped or tortured his victims.

"You don't deserve that," said Michelle Knight, 32, who was rescued from Castro's home in May along with Gina DeJesus and Amanda Berry. "You deserve to spend the rest of your life in prison."

Castro was sentenced Thursday to life in prison without parole, plus 1,000 years. As he pleaded guilty last month, Castro said he understood the plea deal means he will never be released from prison.

Speaking through tears in an emotional statement before the judge handed down his sentence, Knight described her 11 years in captivity as an "eternity."

"You took 11 years of my life away, and now I have got it back," Knight said. "I spent 11 years in hell. Now your hell is just beginning."

Knight began to cry as she described missing her son during her time in captivity, who was two and a half years old at the time she was taken. "Christmas was the most traumatic day," she said. "I never got to spend it with my son."

She described Gina DeJesus as her friend and "teammate."

"She nursed me back to health when I was dying from his abuse," she said. "My friendship with her was the only thing good out of this situation. We said we would someday make it out alive, and we did."

(VIDEO: Michelle Knight: "You will face hell for eternity")

Castro abducted Knight on Aug. 22, 2002, as she was attempting to find a social worker who was in charge of her son's case, said Detective Andy Harasimchuk of the Cleveland Police Department Sex Crime Unit in court.

Castro approached her and offered to help. She accepted his assistance and got into his car, Harasimchuk said, because she knew Castro's daughter Emily.

Castro asked Knight if she wanted to come inside the home to get a puppy for her son, Harasimchuk said. But once inside, Castro restrained Knight with extension cords. After being left for several hours, he said Castro took Knight to the basement, where he restrained her with chains and plastic ties, placed a motorcycle helmet on her head, and sexually assaulted her.

Knight was impregnated several times throughout her captivity, but Castro starved her, kicked and punched her in the stomach, jumped up and down on her stomach, forced her to exercise and fed her rotten food until she miscarried, Harasimchuk said.

Witnesses said Knight was forced to deliver Berry's daughter, Joceyln, under threat of death from Castro. When the baby wouldn't breathe, Knight breathed into her mouth to revive her, witnesses said.

"She brought life into that child," said Frank Ochberg, a forensic psychiatrist called to the stand, describing  her as a "courageous and heroic individual."

When she first discovered Knight in the darkened home, Cleveland police officer Barbara Johnson said Knight "literally launched" herself into an officer's arms.

Knight was having difficulty breathing during the emotional rescue, Johnson said, and appeared so tiny she thought she was a little girl.

"Today, we will close this chapter of our lives," said Sylvia Colon, who described herself as a cousin and spokesperson for the family of DeJesus.

Once in the basement, he restrained the girl, then 14, and sexually assaulted her, Harasimchuk said.

Colon thanked supporters and investigators in court. "Our beloved family member thrives, laughs, swims, dances, and more importantly, she loves and she is loved," Colon said. "She will finish school, go to college, fall in love, and if she chooses, she will get married and have children."

Turning to Castro, Colon spoke in Spanish, saying only, "May God take pity on your soul."

Speaking for her sister, Amanda Berry, Beth Serrano pleaded for privacy.  Berry was concerned her 6-year-old daughter may learn about the horrors of her captivity "the wrong way and at the wrong time," she said.

"I lost my sister all those years, I thought it was forever," Serrano said, crying.

Berry was abducted in April of 2003 when she was 16 years old. She got into Castro's van after she had finished her shift at a local Burger King, Harasimchuk said, because she thought she recognized a woman in his van. Castro lured her into his home by telling her his daughter Angie, whom she knew, was there. Once inside, Harasimchuk said, he restrained her and sexually assaulted her.

"Amanda is not here today," Serrano said. "She is strong and beautiful, inside and out....she's not only my sister, she's the best friend I have, the best person I know."

Admonishing Castro in court just before his sentencing, Judge Michael Russo said Castro perceived himself to be a victim, and not the three women.

Russo addressed the victims, saying they "have persevered, and in fact, they've prevailed."

Turning to Michelle Knight just before court adjourned, he said, "We wish each of you success and a sense of peace."