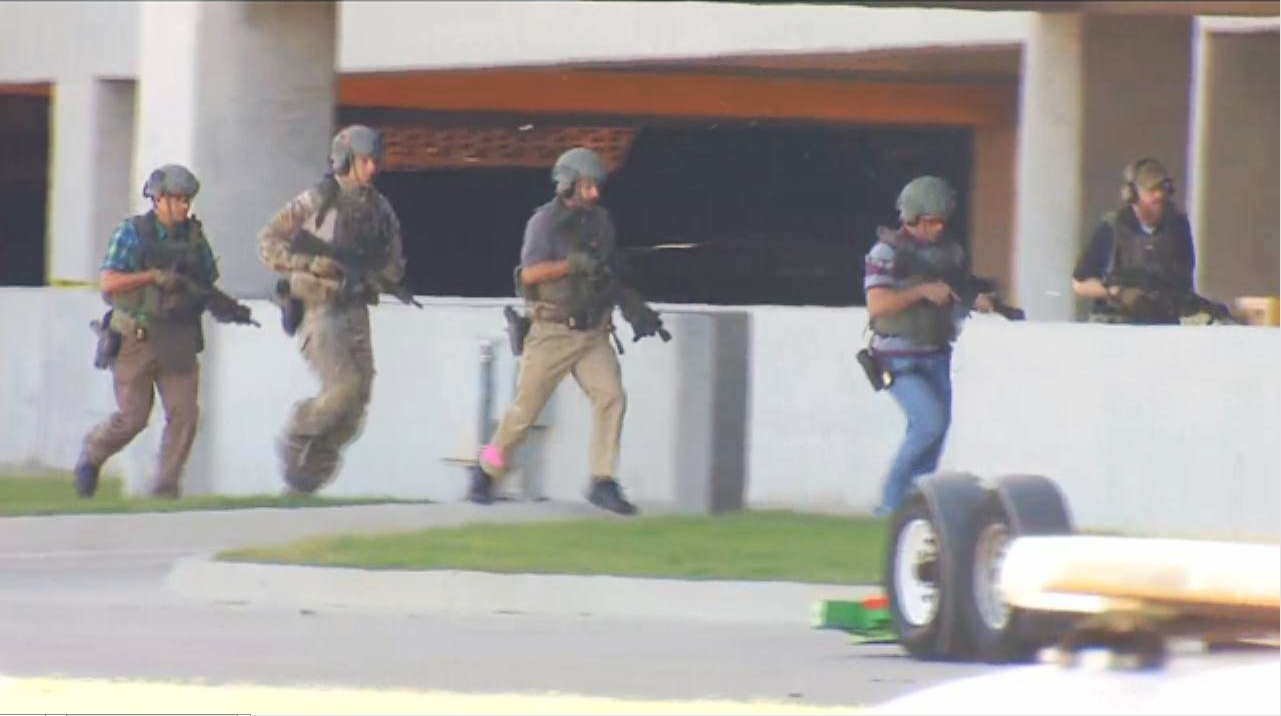 OKLAHOMA CITY -- A gunman lay in wait outside Oklahoma City’s Will Rogers World Airport on Tuesday before shooting and killing a Southwest Airlines employee in a premeditated attack that occurred while hundreds of people waited for flights nearby, police said.

Michael Winchester, 52, was shot while walking between a crowded terminal and the airport employee parking area. The unidentified suspect was later found dead in a pickup truck in public parking garage overlooking the scene. Police said the suspect appeared to die of a self-inflicted gunshot wound.

Winchester was a former punter for the Sooners from 1984-1986, and lettered on Barry Switzer’s 1985 national championship team. The victim’s son, James Winchester, is also a former Sooner football player and is the current long snapper for the Kansas City Chiefs, CBS affiliate KWTV reports.

“This individual went there and waited for the employee to either be coming or going to take this opportunity,” Balderrama said. He wouldn’t say conclusively that it was a “sniper-type” attack.

The 1 p.m. shooting set off a scramble at the airport, with police immediately closing the sprawling complex and asking passengers inside to seek cover.

They diverted incoming flights and refused to give already-loaded aircraft permission to leave. There were concerns the gunman might have entered the terminal and mingled among passengers or employees.

“We have a heightened level of security all the time. These people have access to aircraft so we’re very concerned about that,” airport spokeswoman Karen Carney said.

Winchester- whose address is listed as Washington, Oklahoma, about 35 miles south of the airport - was a former University of Oklahoma football player whose son James is a player for the Kansas City Chiefs.

“It is with great sorrow that Southwest Airlines confirms that a Southwest Employee who was injured during a shooting incident today at Will Rogers World Airport in Oklahoma City has died from injuries,” the airline said in a statement. It canceled flights out of the city for the remainder of the day even though the rest of the terminal planned to reopen.

Hundreds of people were stranded inside the terminal for more than three hours before officers began letting them leave slowly. Carney said about 300 people were held on aircraft away from the terminal after their planes landed ahead of a ground stop.

Once police determined that a suspect found in a red pickup truck on the second floor of a public parking garage was dead, officers gave an all-clear.

The airport handles between 7,000 and 8,000 passengers daily for Alaska, Delta, Southwest and United airlines and has a separate terminal that serves as a transfer center for federal inmates. A jet carrying inmates to the transfer site was allowed to land while the rest of the airport was shuttered.

While airports have high security, it wasn’t immediately known whether surveillance cameras might show the shooting, Balderrama said.

Balderrama initially said police had received reports of a possible second victim, but no one was found.

Police found the suspect’s truck in the garage about three hours after the shooting and determined that someone was inside. They were not sure whether he was dead or alive. After about 75 minutes, using a robot, officers determined the suspect was dead.

A number of inbound flights were diverted to other airports after Will Rogers suspended operations. Southwest redirected one flight back to Dallas while a Las Vegas to Houston flight that stops in Oklahoma City went to Amarillo, Texas, instead. Two commercial flights from Chicago’s O’Hare Airport were directed to Tulsa, about 100 miles away.

Michael Winchester was a punter on the University of Oklahoma’s 1985 national championship team.

“Our hearts are truly heavy for the entire Winchester Family. Mike was a former Sooner student athlete as was his son James/daughter Carolyn,” the school’s athletic director, Joe Castiglione, tweeted Tuesday afternoon. He added “daughter Becca was also a student athlete. Please keep this beautiful family in your prayers” in a later tweet.