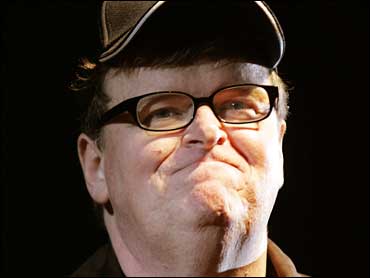 Academy Award-winning filmmaker Michael Moore is under investigation by the U.S. Treasury Department for taking ailing Sept. 11 rescue workers to Cuba for a segment in his upcoming health-care documentary "Sicko," The Associated Press has learned.

The investigation provides another contentious lead-in for a provocative film by Moore, a fierce critic of President Bush. In the past, Moore's adversaries have fanned publicity that helped the filmmaker create a new brand of opinionated blockbuster documentary.

"Sicko" promises to take the health-care industry to task the way Moore confronted America's passion for guns in "Bowling for Columbine" and skewered Bush over his handling of Sept. 11 in "Fahrenheit 9/11."

The Treasury Department's Office of Foreign Assets Control notified Moore in a letter dated May 2 that it was conducting a civil investigation for possible violations of the U.S. trade embargo restricting travel to Cuba. A copy of the letter was obtained Tuesday by the AP.

"This office has no record that a specific license was issued authorizing you to engage in travel-related transactions involving Cuba," Dale Thompson, OFAC chief of general investigations and field operations, wrote in the letter to Moore.

In February, Moore took about 10 ailing workers from the Ground Zero rescue effort in Manhattan for treatment in Cuba, said a person working with the filmmaker on the release of "Sicko." The person requested anonymity because Moore's attorneys had not yet determined how to respond.

Moore, who scolded Bush over the Iraq war during the 2003 Oscar telecast, received the letter Monday, the person said. "Sicko" premieres May 19 at the Cannes Film Festival and debuts in U.S. theaters June 29.

After receiving the letter, Moore arranged to place a copy of the film in a "safe house" outside the country to protect it from government interference, said the person working on the release of the film.

The letter noted that Moore applied Oct. 12, 2006, for permission to go to Cuba "but no determination had been made by OFAC." Moore sought permission to travel there under a provision for full-time journalists, the letter said.

According to the letter, Moore was given 20 business days to provide OFAC with such information as the date of travel and point of departure; the reason for the Cuba trip and his itinerary there; and the names and addresses of those who accompanied him, along with their reasons for going.

Potential penalties for violating the embargo were not indicated. In 2003, the New York Yankees paid the government $75,000 to settle a dispute that it conducted business in Cuba in violation of the embargo. No specifics were released about that case.

A dissection of the U.S. health-care system, "Sicko" was inspired by a segment on Moore's TV show "The Awful Truth," in which he staged a mock funeral outside a health-maintenance organization that had declined a pancreas transplant for a diabetic man. The HMO later relented.

At last September's Toronto International Film Festival, Moore previewed footage shot for "Sicko," presenting stories of personal health-care nightmares. One scene showed a woman who was denied payment for an ambulance ride after a head-on collision because it was not pre-approved.

Moore's opponents have accused him of distorting the facts, and his Cuba trip provoked criticism from conservatives including former Republican Sen. Fred Thompson, who assailed the filmmaker in a blog at National Review Online.

"I have no expectation that Moore is going to tell the truth about Cuba or health care," wrote Thompson, the subject of speculation about a possible presidential run. "I defend his right to do what he does, but Moore's talent for clever falsehoods has been too well documented."

The timing of the investigation is reminiscent of the firestorm that preceded the Cannes debut of "Fahrenheit 9/11," which won the festival's top prize in 2004. The Walt Disney Co. refused to let subsidiary Miramax release the film because of its political content, prompting Miramax bosses Harvey and Bob Weinstein to release "Fahrenheit 9/11" on their own.

The Weinsteins later left Miramax to form the Weinstein Co., which is releasing "Sicko." They declined to comment on the Treasury investigation, said company spokeswoman Sarah Levinson Rothman.