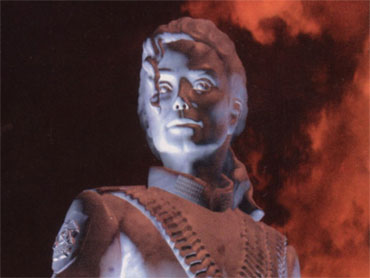 1963
After several years of training, The Jackson 5 begin to perform in public.

1968
The Jackson 5, with 10-year-old Michael as lead singer, signs with Motown Records. In 1970, their first album is released, "Diana Ross Presents the Jackson 5." It includes the hit singles "I Want You Back" and "I'll Be There," which go to No. 1.

1972
While still singing with the Jackson 5, Michael Jackson puts out his first solo album, "Got to Be There." It spawns his first No. 1 hit, "Ben."

1979
Jackson's first solo album as an adult, "Off the Wall," is released. It is his first collaboration with producer Quincy Jones.

1982
Jackson releases "Thriller," which becomes the world's best-selling album of all time and earns the singer eight Grammy awards. Seven of the album's nine songs hit No. 1. The music videos for "Billie Jean," "Beat It" and "Thriller" are elaborate productions that revolutionize the genre, and their popularity paves the way for other black artists, who had largely been shunned by the fledgling MTV.

1983
Jackson electrifies the 50 million viewers of the "Motown 25" television special by singing and dancing to "Billie Jean" while wearing a black fedora, one white glove, and pants that end above his ankles.

1984
During production of a Pepsi-Cola commercial, Jackson's scalp sustains burns when an explosion sets his hair on fire.

1985
Jackson and Lionel Richie write what becomes one of the fastest-selling singles ever with "We Are the World." The song was produced to raise money for victims of the Ethiopian famine. Jackson also pays $47.5 million for the rights to more than 250 songs written by John Lennon and Paul McCartney.

1993
Jackson reveals in a TV interview that he had an inherited disorder that caused his skin pigmentation to fade. He was also accused of molesting a boy who often stayed at his home. The singer denied any wrongdoing, reached a settlement with the boy's family, reported to be $20 million, and criminal charges were never filed.

A daughter named Paris Michael Katherine Jackson is born to Jackson and Rowe. The two divorce the following year.

2002
Jackson's third child, a son named Prince Michael Jackson II, nicknamed "Blanket," is born to a surrogate mother on Feb. 21, 2002. Later that year, Jackson playfully dangled the infant over a hotel balcony in Berlin while a throng of fans watched from below. He later called the incident a "terrible mistake."

2003
ABC airs the British documentary, "Living With Michael Jackson." Jackson's comments about allowing kids spend the night in his bedroom prompted authorities to look into his relationships with children. Later that year, law enforcement agents raid his Neverland Ranch, and on Nov. 20, 2003, Jackson is booked on suspicion of child molestation.

2005
A judge clears Jackson of charges he molested a 13-year-old cancer survivor at Neverland in 2003. He had been accused of plying the boy with alcohol and groping him, and of engaging in strange and inappropriate behavior with other children.

September 2005
Jackson moves with his children to Bahrain.

2006
Plagued by financial problems since his trial, Jackson closes the house on his 2,600-acre Neverland Ranch estate in California, laying off most of the staff after agreeing to pay hundreds of thousands of dollars in back wages to avoid a lawsuit by state labor officials. In March, a deal is reached to keep Neverland off the auction block. Financial Title Co. of San Francisco said he owed $24.5 million on the property.

March 2009
Jackson announces he will perform 50 shows at London's 02 Arena in July. Tickets sell out within hours.

Jan. 25, 2009
Michael Jackson dies after being taken to UCLA Medical Center in Los Angeles. He was 50 years old.

© MMIX The Associated Press. All Rights Reserved. This material may not be published, broadcast, rewritten, or redistributed.