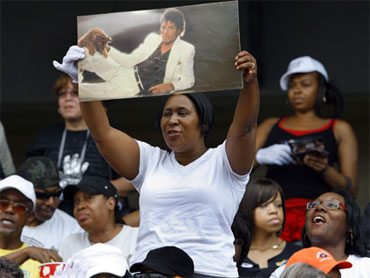 Erin Jacobs once traded her brand new bicycle for tickets to see Michael Jackson. Now, more than 25 years later, it's her time, organizational skills and gas money that she's giving to the King of Pop.

As an organizer of two major fan groups, Jacobs is just one of thousands of supporters keeping Jackson's legacy alive - along with the pursuit of justice for his untimely death a year ago this Friday.

Since then, the singer's notoriously loyal followers have traded vigils at the hospital and family home for pilgrimages to his tomb and protests at the courthouse where the doctor charged with killing Jackson will be tried.

"It's absolutely humbling that he has so much support from fans," Jacobs said in a recent interview.

A travel agent who lives in Yorba Linda, California, Jacobs made her first 50-mile trip to the Forest Lawn cemetery in Glendale, California, shortly after Jackson was buried there in September. It was a personal trip.

These days, Jacobs has gone on to coordinate monthly pilgrimages to the cemetery by the Official Michael Jackson Fans of Southern California.

Hundreds are expected at Forest Lawn on Friday to commemorate Jackson's death. The singer's tomb inside the cemetery's gothic Great Mausoleum remains closed to the public, and Friday's memorial won't change that.

But through the efforts of Jacobs and others, it's become a place where Jackson's international fan base comes to grieve. Many who can't make it in person send letters, poems, artwork and other gifts so that Jacobs and others can deliver them to the cemetery, where they are placed at the singer's tomb until new items arrive.

"A year later, it feels like it was yesterday," Jacobs said.

Another focal point for Jackson fans has become the downtown Los Angeles courthouse where Dr. Conrad Murray will be tried on an involuntary manslaughter charge for Jackson's death.

On hearing days, fans wearing sequined gloves and T-shirts calling for justice wait for hours clutching signs denouncing Murray and shout at him for the brief moments it takes him to walk from the curb to the front door.

Johnell Johnson, 19, an actress from Fontana, California, woke up at 4:30 a.m. to get to the courthouse in time for a recent midday hearing in Murray's case. Wearing a vintage pin from Jackson's "Bad" era, Johnson said it was important for her to be there to support Jackson's family.

It's a sentiment echoed by many others who try to attend the proceedings. Only a handful are allowed into the courtroom, but others are content to shout their support to Jackson's parents and siblings, who occasionally stop to hug or speak to fans. At the hearing earlier this month, the singer's mother, Katherine, carried roses that fans handed her.

Fans at the cemetery Friday hope to bring more than 3,000 roses, Jacobs said, although officials don't want the memorial to include the release of doves or balloons, as was originally planned.

None of this fan passion is really new. Jackson's supporters have long been among the most devoted and vocal of any entertainer's in recent memory. More than 1,200 people were outside the Santa Maria, California, courthouse in 2005 when the singer was acquitted of all counts in a child-molestation trial. Last year thousands flocked to the hospital where Jackson was pronounced dead, and throngs remained outside the family's home for weeks.

Friday's anniversary is ostensibly a fan affair - the singer's estate, which controls Jackson's music and likeness - has not sanctioned any events, and while some family members have thrown support behind a paid gala in Beverly Hills, California, on Saturday night, there hasn't been a formal family announcement of tribute.

Several of those who protested outside the courthouse June 14 were planning a variety of events, from the staging of a massive "Thriller" tribute to a rally seeking justice planned for downtown Los Angeles on June 26.

Taaj Malik, who is organizing the rally and maintains several fan groups on Facebook, was among the first fans to arrive outside the singer's rented mansion when news of his hospitalization broke. She recalled recently that she had tears in her eyes as she traveled the 50 miles from neighboring Orange County.

A Jackson fan since her childhood in Britain, Malik said she prefers to focus on gaining justice for Jackson than on her grief. "I've ignored it," said Malik, who along with Jacobs is a member of the group Justice 4 MJ. "I've blocked it. I refuse to let it come in to me."

Jacobs, who traded a brand-new Beach Cruiser her mother scrimped to buy her for tickets for the Jackson's Victory Tour in 1984, said she expects fans from around the world to fly in for the Forest Lawn memorial on Friday. Some will board party buses the next day for a trip to Neverland Ranch, which is now shuttered but still owned by the estate.

That's certainly true for Johnson, 19, who summed up the fan family as an extension of Jackson's eccentric life.

"Michael Jackson has always been misunderstood and I think we as his fans are as well," she said. "People don't understand our love for Michael Jackson, so to be around people who are just like us, it humbles us."