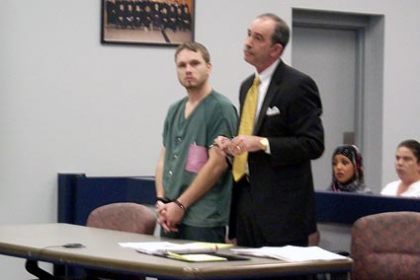 Judge Vera Jones convicted Nicholson, 27, of first-degree pre-meditated murder in the death of his 15-month-old daughter, Ella Stafford, and second-degree murder for the death his 13-month-old son, Johnathan Sanderlin. As requested by his lawyer, Nicholson was given a bench trial in place of a trial by jury.

While the prosecutor called the children's deaths "torture," Nicholson's lawyer claimed his client fell asleep and was guilty of no more than negligence.

The Wayne County Medical Examiner has said it's possible, but unlikely, that the children could have turned on the water and entered the bathtub on their own.

After deliberation Jones said she believes Johnathan was drowned first accidentally and Ella was later drowned deliberately so Nicholson could establish an alibi, reports the Detroit Free Press.

"I am convinced the defendant was stressed and unthinkingly struck out at the child," Jones reportedly said. "I just think he wanted him to be quiet."

Sarah McGee and Tayler Stafford, the children's mothers, were reportedly present for the conviction. According to the Detroit Free Press, McGee said she had "no disagreement with the verdict."

Nicholson will be sentenced May 13 and faces up to life in prison without parole.