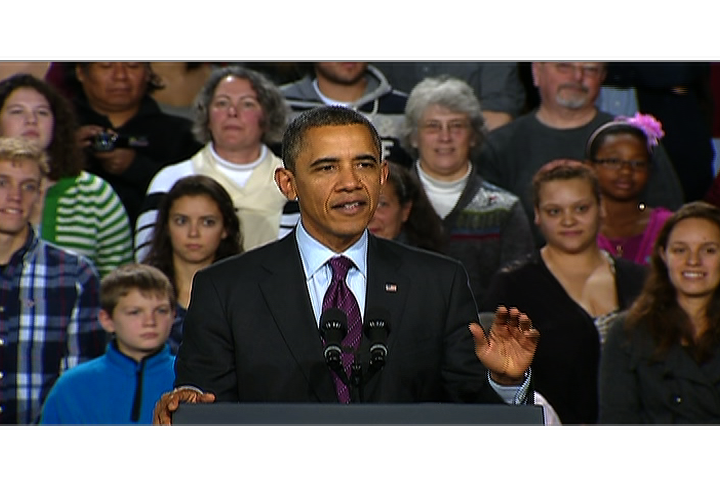 A group of protesters seemingly affiliated with the "Occupy" movement interrupted President Obama's speech in Manchester, New Hampshire on Tuesday, engaging in a call-and-response protest for about 20 seconds before being drowned out by Mr. Obama's supporters.

"Mic check!" yelled a voice from the crowd as Mr. Obama was giving a speech calling on Congress to pass and extend a payroll tax cut. Other protesters repeated "mic check," in the style of the Occupy protests, as Mr. Obama halted his speech and looked out into the crowd.

"Mr. President, over 4,000 peaceful protesters," the lead protester began, his words then repeated by the other protesters. They then made reference to those protesters being arrested, though their words became difficult to hear.

At this point those in the crowd began booing and chanting "Fired up, ready to go," prompting Mr. Obama to say, "no, no, no, it's ok. It's ok."

"All right, OK guys," he continued, trying to calm the crowd as supporters started chanting "Obama" over the protesters.

"I'm going to be talking about a whole range of things today, and I appreciate you guys making your point, let me go ahead and make mine," he said. "All right? And I'll listen to you, you listen to me." The comment prompted applause from the audience.

He went on to reference the movement twice more in his remarks.

"A lot of the folks who've been down in New York and all across the country in the 'Occupy' movement, there is a profound sense of frustration, there's a profound sense of frustration about the fact that the essence of the American dream, which is that if you work hard, if you stick to it that you can make it, feels like that's slipping away," said the president. "And that's not the way things are supposed to be, not here, not in America. This is a place where your hard work and your responsibility's supposed to pay off, it's supposed to be a big, compassionate country where everybody who works hard should have a chance to get ahead, not just the person who owns the factory, but then men and women who work on the factory floor."

The protesters handed out their full message on paper to the assembled press.

"Mr. President, over 4000 peaceful protesters have been arrested while bankers continue to destroy the American economy," it said. "You must stop the assault on our 1st Amendment rights. Your silence sends a message that police brutality is acceptable. Banks got bailed out. We got sold out."