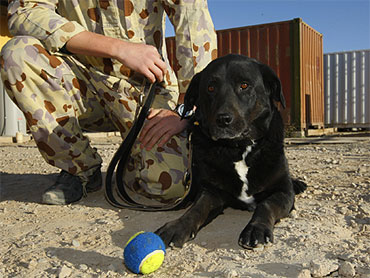 A bomb-sniffing dog that disappeared during a fierce battle in Afghanistan between Australian troops and militant fighters has been found and returned to its unit after more than a year.

And Sabi the black labrador is getting a celebrity welcome home.

Sabi was with a joint Australian-Afghan army patrol ambushed in restive Uruzgan province in September 2008, triggering a gunfight that wounded nine troops and earned one Australian soldier the country's highest bravery medal.

But there was no sign of Sabi after the battle, and months of searching failed to find any sign of the retriever - until now.

Defense officials said Thursday that a U.S. soldier recovered Sabi at an isolated patrol base elsewhere in Uruzgan. Further details about the base were not given.

The dog was returned to the Australians' base in the province just in time for a visit by Prime Minister Kevin Rudd, who was photographed Wednesday along with the U.S. commander in Afghanistan Gen. Stanley McChrystal petting Sabi.

"Sabi is back home in one piece and is a genuinely nice pooch as well," Rudd told reporters.

Exactly where Sabi has been or what happened to her during the past 14 months will probably never be known, though that she was in good condition when she was found indicated somebody had been looking after her, military spokesman Brig. Brian Dawson told reporters in Canberra.

The dog was being tested for diseases before a decision was made on whether she can return to Australia.

More than 1,500 Australian troops are in Afghanistan and most of them are involved in training Afghan security forces. Among them are units that use dogs to sniff out roadside bombs and other explosive booby traps.