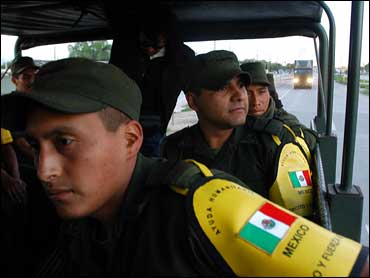 Mexican army convoys and a navy ship laden with food, supplies and specialists traveled to the U.S. Wednesday to help in the Hurricane Katrina relief effort — a highly symbolic journey marking the first time Mexico's military has aided its powerful northern neighbor.

Radio talk shows and newspapers in Mexico buzzed with excitement over news that this country, long on the receiving end of U.S. disaster relief, was sending a hurricane aid convoy north.

The convoy represents the first Mexican military unit to operate on U.S. soil since 1846, when Mexican troops briefly marched into Texas, which had separated from Mexico and joined the United States.

"This is just an act of solidarity between two peoples who are brothers," said Fox's spokesman, Ruben Aguilar.

Army press office employee Francisco Aguilar said he did not have details of the convoy's precise location. It originally was scheduled to arrive in Houston to provide food for evacuees, but apparently had been rerouted to Dallas.

All of the convoy's participants will be unarmed. In July 2004, Mexican troops interrupted the funeral of a Mexican-born Marine killed in Iraq. They objected to the nonworking, ceremonial rifles carried by two Marines who came from the United States for the ceremony.

Mexico later apologized but said it has an obligation to enforce a ban on foreign troops carrying weapons in its territory.

The convoy has "a very high symbolic content," said Javier Oliva, a political scientist at Mexico's National Autonomous University. "This is a very sensitive subject, for historic and political reasons."

Large Mexican flags were taped to many of the 35 olive-green Mexican Army trucks and tractor trailers as they rumbled northward toward the border Wednesday.

"This is the first time that the United States has accepted a military mission from Mexico" for such work, said Javier Ibarrola, a newspaper columnist who covers military affairs in Mexico.

The relief mission was controversial for some Mexican lawmakers, who said the president should have sought Senate approval before sending troops abroad. But the Fox administration said no such approval was needed for aid missions.

The government was planning to send a second, 12-vehicle aid convoy to the U.S. sometime this week and has sent a Mexican navy ship equipped with rescue vehicles and helicopters to the Mississippi coast.

The ship Papaloapan left the Gulf coast port of Tampico on Monday. Fox's office was unsure when it would arrive, but said it would dock about 30 miles south of Biloxi, Miss.