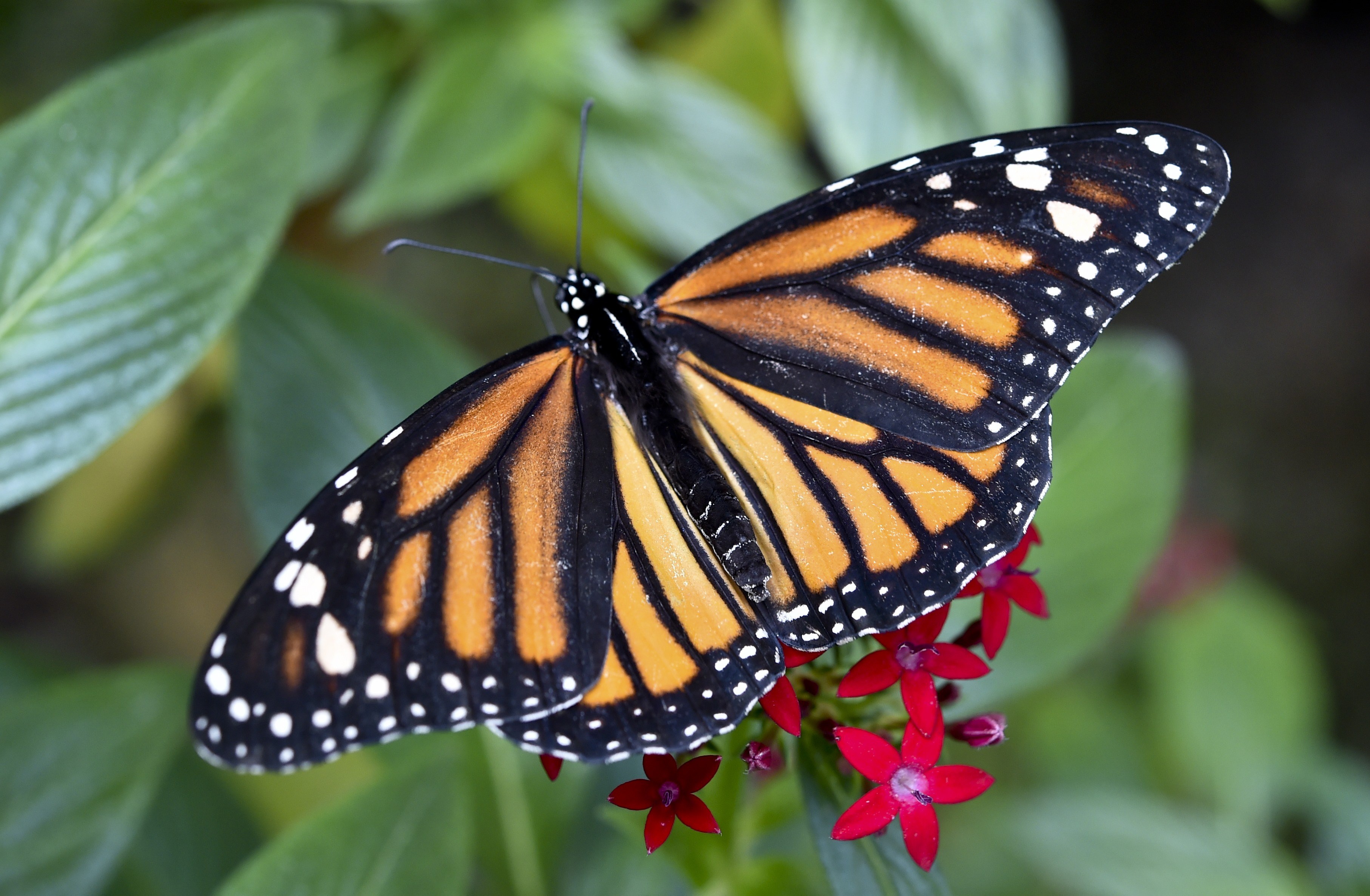 MEXICO CITY -- The number of monarch butterflies wintering in Mexico dropped by 27 percent this year, reversing last year’s recovery from historically low numbers, according to a study by government and independent experts released Thursday.

The experts say the decline could be due to late winter storms last year that blew down more than 100 acres of forests where migrating monarch butterflies spend the winter in central Mexico.

Millions of monarchs make the 3,400-mile migration from the United States and Canada each year, and they cluster tightly in the pine and fir forests west of Mexico City. They are counted not by individuals, but by the area they cover.

“The reduction in the area of forest they occupied this year is most probably due to the high mortality caused by storms and cold weather last year,” said Omar Vidal, the head of the Mexico office of the World Wildlife Fund. “It is a clear reminder for the three countries that they must step up actions to protect breeding, feeding and migratory habitat.”

Officials estimate the storms in March killed about 6.2 million butterflies, almost 7.4 percent of the estimated 84 million that wintered in Mexico, said Alejandro Del Mazo, Mexico’s commissioner for protected areas. The monarchs were preparing to fly back to the U.S. and Canada at the time the storm hit.

While no butterfly lives to make the round trip, a reduction in the number making it out of the wintering grounds often results in a decline among those who return the next year.

The combination of rain, cold and high winds from the storms caused the loss of 133 acres of pine and fir trees in the mountaintop wintering grounds, more than four times the amount lost to illegal logging. It was the biggest storm-related loss since the winter of 2009-10, when unusually heavy rainstorms and mudslides caused the destruction of 262 acres of trees.

However, the fight against illegal logging continues. Last week, authorities detained a man trying to truck about a dozen huge tree trunks out of the butterfly reserve, using false papers asserting the trees were diseased and were being removed to reduce risk. In fact, investigators found the trees had been healthy.

The monarchs depend on finding relatively well-preserved forests, where millions of the orange-and-black butterflies hang in clumps from the boughs. The trees, and the clumping, help protect the butterflies from cold rains and steep drops in temperature.

Leading monarch expert Lincoln Brower said by email that even the removal of trees downed or damaged by storms can be a problem because the sanctuaries are damaged when trucks haul out the tree trunks, causing compaction of the soil and erosion.

Del Mazo defended such salvage logging, saying it was necessary to remove downed trees that could fuel forest fires.

Another problem has been the loss of milkweed - the plant monarchs rely on for food - in the United States and Canada, because of the increased use of herbicides and the conversion of land to development.

The loss of forests in Mexico and milkweed north of the border has proved devastating. This year the butterflies covered only 7.19 acres.

“We cannot control the climate, but we can do much better in eradicating illegal logging in the reserve and tackling habitat loss in the U.S. and Canada,” Vidal said. “But, even if Mexico(asterisk)s overwintering sites never lose another tree, without food and habitat along the migration routes, the forests will soon bid farewell” to the monarchs.

The butterfly itself is not endangered, but the migration does appear to be. Not all monarchs migrate.

Politics may also cause a problem for the butterflies. Environmental cooperation was close with the administration of former U.S. president Barack Obama, but it is unclear whether that will continue under President Donald Trump, who has pledged to build a wall along the U.S.-Mexico border.

“We are worried that there could be an environmental wall, and that its first direct victim might be the monarch butterfly,” said writer and environmentalist Homero Aridjis.