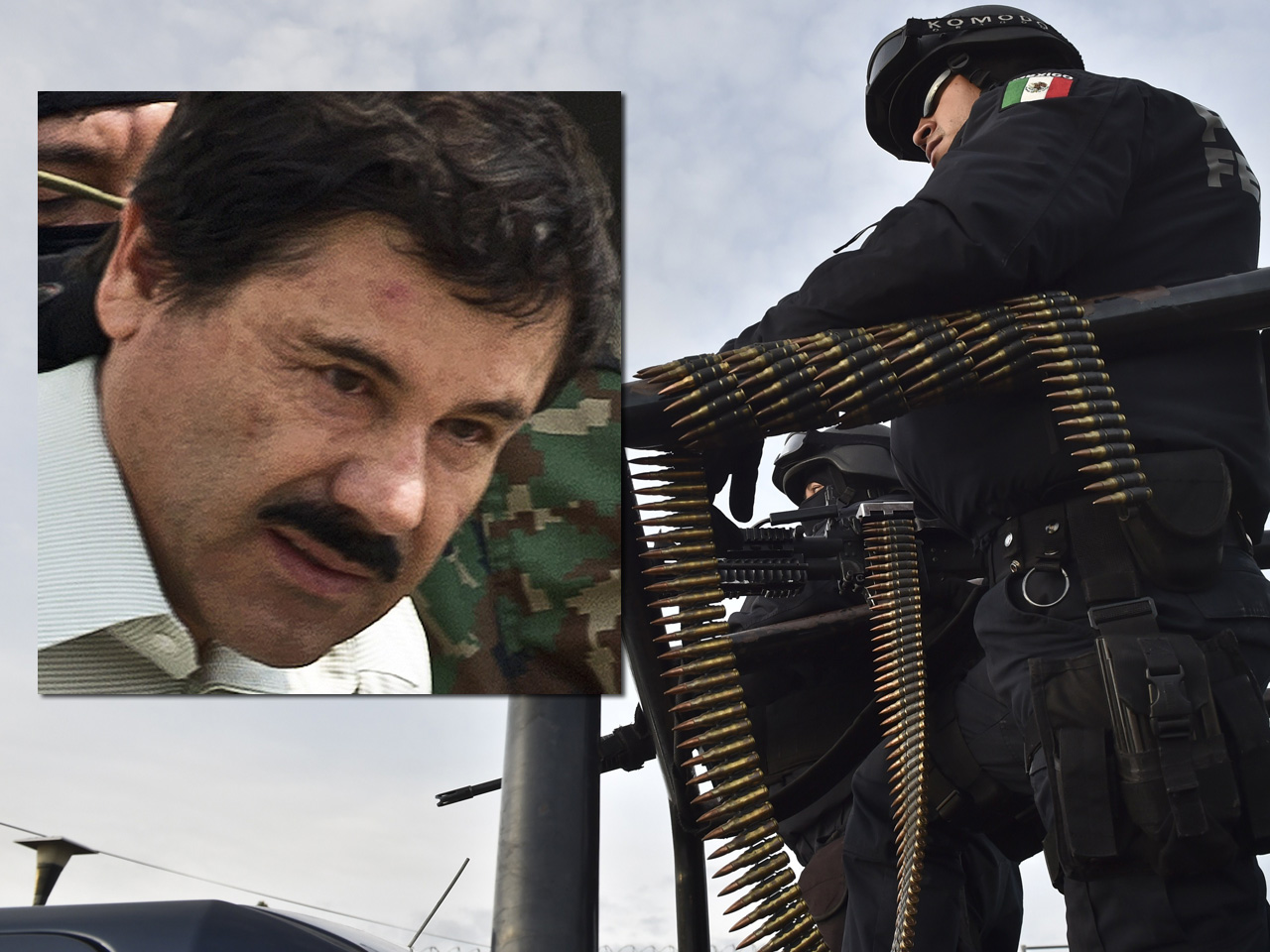 MEXICO CITY - Mexico mounted an all-out manhunt Sunday for its most powerful drug lord, Joaquin "El Chapo" Guzman, who escaped from a maximum security prison through a 1-mile tunnel from a small opening in the shower area of his cell, according to the country's top security official.

The elaborate underground escape route, built allegedly without the detection of authorities, allowed Guzman to do what Mexican officials promised would never happen after his re-capture last year - slip out of one of the country's most secure penitentiaries for the second time.

If Guzman is not captured immediately, the drug lord will likely be back in full command and control of the Sinaloa cartel in 48 hours, said Michael S. Vigil, a retired U.S. Drug Enforcement Administration chief of international operations.

"We may never find him again," he said. "All the accolades that Mexico has received in their counterdrug efforts will be erased by this one event."

Eighteen employees from various part of the Altiplano prison, 55 miles west of Mexico City, have been taken in for questioning, Security Commissioner Monte Alejandro Rubido said in a news conference without answering questions.

CBS News correspondent Bill Whitaker reports Guzman was the first Mexican drug trafficker to hire architects and engineers to build elaborate tunnels, complete with railways, to ferry drugs under the U.S.-Mexico border and he spent millions adapting them to use as escape routes from his many hideouts.

A manhunt began immediately late Saturday for the head of the powerful Sinaloa Cartel, which has an international reach and is believed to control most of the major crossing points for drugs at the U.S. border with Mexico.

Guatemala's Interior Ministry said a special task force of police and soldiers were watching the border with Mexico for any sign of fugitive drug lord.

"The U.S. government stands ready to work with our Mexican partners to provide any assistance that may help support his swift recapture," U.S. Attorney General Loretta Lynch said in a statement.

Associated Press journalists near Altiplano saw the roads were being heavily patrolled by federal police with numerous checkpoints and a Blackhawk helicopter flying overhead. Flights were also suspended at Toluca airport near the penitentiary in the State of Mexico, and civil aviation hangars were being searched.

Guzman was last seen about 9 p.m. in the shower area of his cell, according to a statement from the National Security Commission. After a time, he was lost by the prison's security camera surveillance network. Upon checking his cell, authorities found it empty and a 20-by-20-inch hole near the shower.

Guzman's escape is a major embarrassment to the administration of President Enrique Pena Nieto, which had received plaudits for its aggressive approach to top drug lords. Since the government took office in late 2012, Mexican authorities have nabbed or killed six of them, including Guzman.

Pena Nieto arrived in France on Sunday and will stick to his planned schedule, according to a federal official who spoke on condition of anonymity because he wasn't authorized to be named. But Interior Secretary Miguel Angel Osorio Chong, the Cabinet's head of security, will return to Mexico from France.

Guzman faces multiple federal drug trafficking indictments in the U.S. as well as Mexico, and was on the U.S. Drug Enforcement Administration's most-wanted list. The U.S. has said it would file an extradition request, though it's not clear if that has already happened. American officials have expressed an eagerness to prosecute Guzman for what they believe is an extensive drug running operation across the U.S.

The Mexican government at the time vehemently denied the need to extradite Guzman, even as many expressed fears he would escape as he did in 2001 while serving a 20-year sentence in the country's other top-security prison, Puente Grande, in the western state of Jalisco.

Former Mexican Attorney General Jesus Murillo Karam told the AP earlier this year that the U.S. would get Guzman in "about 300 or 400 years" after he served time for all his crimes in Mexico.

He dismissed concerns that Guzman could escape a second time. That risk "does not exist," Murillo Karam said.

"It wasn't overconfidence, it was Mexican judicial nationalism," said Raul Benitez, a security expert at Mexico's National Autonomous University. "First he had to pay his debt in Mexico and then in the U.S. Now it's very evident that it was a mistake."

It was difficult to believe that such an elaborate structure could have been built without the detection of authorities, though photographs show the corrections facility surrounded by construction, with large open ditches and lots of metal drainage pipes that could have camouflaged such a project.

Guzman dropped by ladder into a hole 10 yards deep that connected with a tunnel about 1.7 yards high that was fully ventilated and had lighting, Rubido said. Authorities also found a motorcycle adapted to run on rails that they believe was used to carry dirt out and tools in during the construction.

The tunnel terminated in a half-built house in a rural farm field near the prison, according to radio transmissions among authorities who cordoned off the structure. They would not confirm the location of the end of the tunnel directly to the AP.

A 74-year-old rancher whose home is about 400 yards from the cordoned property said he had seen a couple in their 30s start building on the property about a year ago. He did not want to be named for safety reasons. He said they were very friendly and not from the area.

"One day my cows made it over to the house and I didn't see anything strange," said the rancher, whose home sits between the prison and the other property atop a small rise with a clear view to the prison.

Guzman is known for the elaborate tunnels his cartel has built underneath the Mexico-U.S. border to transport cocaine, methamphetamines and marijuana, with ventilation, lighting and even railcars to easily move products.

He was first caught by authorities in Guatemala in 1993, extradited and sentenced to 20 years in prison on drug-trafficking-related charges. Many accounts say he escaped in a laundry cart, although there have been several versions of how he got away. What is clear is that he had help from prison guards, who were prosecuted and convicted.

Guzman was finally re-captured in February 2014 after eluding authorities for days across his home state of Sinaloa, for which the cartel is named. He was listed as 56 years old last year, though there are discrepancies in his birth date.

During his first stint as a fugitive, Guzman transformed himself from a middling Mexican capo into arguably the most powerful drug trafficker in the world. His fortune grew to be estimated at more than $1 billion, according to Forbes magazine, which listed him among the "World's Most Powerful People" (along with the U.S. Treasury Department) and ranked him above the presidents of France and Venezuela.

He finally was tracked down to a modest beachside high-rise in the Pacific Coast resort city of Mazatlan on Feb. 22, 2014, where he had been hiding with his wife and twin daughters. He was taken in the early morning without a shot fired.

Before they reached him, security forces went on a several-day chase through Culiacan, the capital of Sinaloa state. They found houses where Guzman supposedly had been staying with steel-enforced doors and the same kind of lighted, ventilated escape tunnels.

Even with his 2014 capture, Guzman's Sinaloa Cartel empire continues to stretch throughout North America and reaches as far away as Europe and Australia. The cartel has been heavily involved in the bloody drug war that has torn through parts of Mexico for the last decade, taking at least an estimated 100,000 lives.