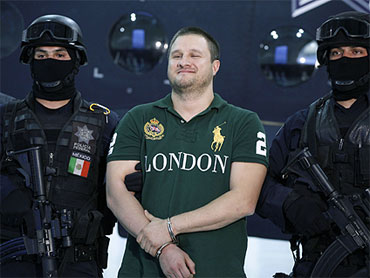 A former Texas high school football player and petty street dealer who allegedly rose to become one of Mexico's most savage assassins says he personally knew the country's top drug lords and shipped cocaine from Colombia through Panama.

In a video released by Mexico's federal police, Edgar Valdez Villarreal, known as "the Barbie" for his fair complexion and green eyes, also told his interrogators that he transported cash hidden in trailers.

With his arrest Monday, Valdez became the third major drug lord brought down by Mexico in less than a year. The 37-year-old Valdez faces charges in three U.S. states for trucking in tons of cocaine.

"I have work ... investments, there in Colombia," he said, laughing, on the tape that was broadcast late Tuesday and provided to news organizations, including The Associated Press.

When asked if he worked in drugs, he replied yes.

U.S. prosecutors say Valdez has been the source of tons of cocaine smuggled into the United States.

The arrest was portrayed by the Mexican and U.S. governments as a victory for President Felipe Calderon, who is trying to recover public support for his war on organized crime in the face of escalating violence.

Valdez told interrogators that he knew the principal leaders of the drug cartels, such as Guzman, the brothers Arturo and Hector Beltran Leyva, Ismael "El Mayo" Zambada and Jose Gerardo "El Indio" Alvarez, whom he called his friend.

During the video, Valdez sometimes looked up and laughed. He constantly wiped sweat with a tissue or shirt sleeve, though he did not look nervous.

Local media also showed a video from inside the three-level residence where he was arrested, including paintings of religious subjects, horses and flowers, Gucci and Cartier boxes, big-screen TVs, a pool table and a bar.

Mexican police said they chased Valdez across five Mexican states for a year, a pursuit that intensified in recent months as they raided home after home owned by the drug lord, missing him but nabbing several of his allies.

His arrest also yielded computers, telephones and other equipment authorities said would likely provide more information about his group.

Valdez's presentation before the media Tuesday coincided with an announcement that Colombian authorities had detained 11 people allegedly linked to the Mexican kingpin in that South American cocaine-producing country. Mexican Federal Police Commissioner Facundo Rosas said the arrests were likely related, with Colombian authorities taking advantage of a break in his organization.

As a U.S. citizen living illegally in Mexico, Valdez could be deported to the United States if Mexico agrees, or he could face prosecution in Mexico for drug-related crimes. Mexican authorities say he could be responsible for dozens of murders.

Born in the border city of Laredo, Texas, Valdez grew up in a middle-class subdivision popular with Border Patrol agents, police officers and firefighters. His father was a nightclub and bar owner.

The former Laredo United High School linebacker became a small-time street dealer as a teen, before rising to become the head of a group of assassins for Mexico's notorious Beltran Leyva gang, allied with the powerful Sinaloa cartel, according to U.S. and Mexican officials.

After leaving Texas for Mexico, Valdez quickly rose through the ranks of the Beltran Leyva cartel, police say. He was anointed head of Acapulco operations by cartel leader Arturo Beltran Leyva after serving as the drug kingpin's top bodyguard, Rosas said.

In Mexico, Valdez built up a life of luxury, with homes in the most expensive neighborhoods of Mexico City. Valdez said in the tape that he commissioned a movie on his life and invested $200,000 in it, but it was never released.

"He was flamboyant, he felt like he was untouchable," said a senior U.S. law enforcement official, who wasn't authorized to speak on the record.

The biggest coup came in December, when Mexican marines killed cartel lord Arturo Beltran Leyva during a gunbattle in Cuernavaca.

That unleashed a gruesome fight between Valdez and Beltran Leyva's brother, Hector, the only one of the cartel's founders who was still at large. Decapitated and dismembered bodies littered the streets of Cuernavaca and Acapulco — and often hung from bridges — along with messages threatening one of the two feuding factions.

Valdez confirmed on the tape that he berated one accomplice for shooting Paraguayan soccer player Salvador Cabanas during an argument at a Mexico City bar in January, an attack that led to the arrest of a minor henchman, who later told police about Valdez's fury over the incident.

Valdez said he hid the suspect, Jose Jorge Balderas, also known as "JJ", who is still at large.

More of his allies fell in a series of raids and shootouts in Mexico City, Acapulco and other towns. Fifteen Valdez henchmen were killed in a battle with soldiers in June in Taxco, a mountain hamlet outside of Mexico City.

The pursuit intensified six weeks ago when Mexican security officials began getting tips on Valdez's whereabouts and approached U.S. agents for help, according to U.S. law enforcement officials in Washington, who spoke on condition of anonymity because of the sensitivity surrounding the arrest. U.S. intelligence helped pinpoint his location Monday.

An elite, U.S.-trained Mexican federal police squad arrested Valdez and four accomplices at the entrance of a ranch outside Mexico City.