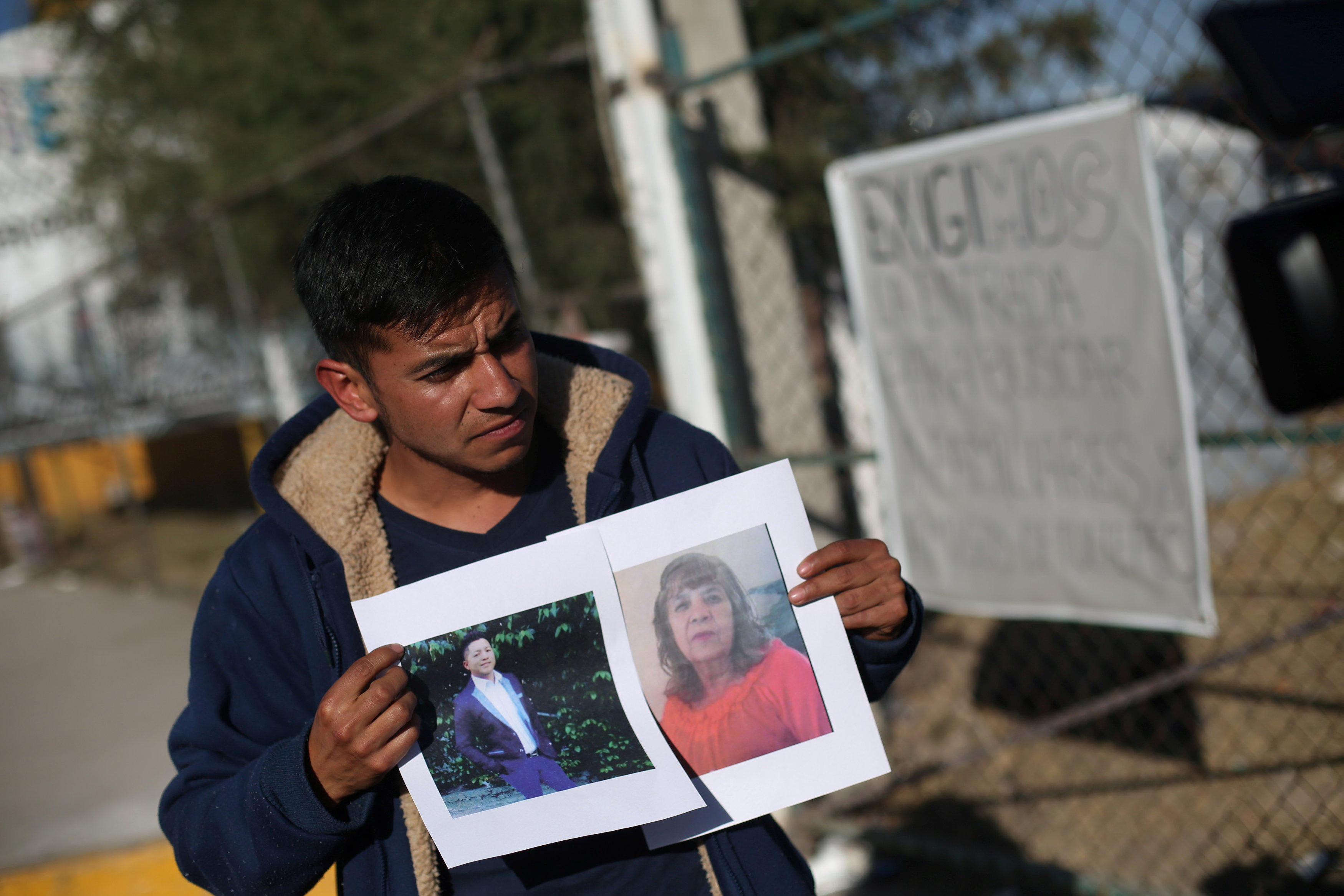 TULTEPEC, Mexico -- Some brought photos of their missing loved ones to the Mexican fireworks market where a series of explosions killed at least 33 people, while others who had already claimed their dead began to mourn their loss.

Friends and relatives of Ernesto Ornelas, 67, gathered in the narrow street in front of his house in the Mexico City suburb of Naucalpan late Wednesday to pray, sing and mourn his loss in the deadly blasts, whose cause has still not been determined.

Authorities in Mexico State said the death toll could rise further because 12 people were listed as missing and some body parts were found at the scene of Tuesday’s tragedy in the San Pablito fireworks market in the city of Tultepec.

Ornelas had been shopping for fireworks with his son Cesar Ornelas and his 15-year-old grandson Francisco when the explosions occurred. They became separated in their dash to escape. Cesar and Francisco suffered minor injuries and only later saw Ernesto, bleeding from his head and with his clothing burned, loaded into an ambulance.

After learning which hospital he’d been taken to they were told he had died of a head injury, Cesar Ornelas said Wednesday. “We don’t know if it was from a fall or if a flying rock hit him.”

CBS News correspondent Ben Tracy reports, according to witnesses, there were a total of at least six large explosions over the course of about 10 horrifying minutes.

At least one of the youngest burn victims has already been transported to Texas, for treatment at the burns unit at the Shriner’s Hospital in Galveston.

Investigators were focusing their attention on ignored safety measures that led to vendors displaying fireworks outside their concrete stalls in the passageways that divided the sellers. The passageways were supposed to prevent exactly the sort of devastating chain reaction that occurred.

Juana Antolina Hernandez, who has run a stand for 22 years in San Pablito next to one operated by her parents, escaped the market in a mad dash when the explosions began. On Wednesday, she was one of the disconsolate residents waiting outside a local morgue.

“I can’t find my father, and my mother is very badly burned,” said Hernandez, 49. “I am waiting here for them to tell me if my father is here, but up to this point, nothing.”

Of the 33 dead, the state listed 10 as unidentified. In some cases, the bodies were so badly burned that DNA identification will be necessary.

San Pablito was especially well stocked for the holidays and bustling with hundreds of shoppers when the blast reduced the market to a stark expanse of ash, rubble and the scorched metal. Dramatic video of the explosion showed a towering plume of smoke that was lit up by a staccato of bangs and flashes of light, the third such incident to ravage the market on the northern outskirts of Mexico’s capital since 2005.

Refugio Leon, whose family ran seven stalls in the market, said vendors commonly stacked displays of bottle rockets and firecrackers outside their establishments in the passageways - even though the rules supposedly forbade putting merchandise in what were supposed to be safety buffers.

“Everybody did it,” Leon said, speculating that it may have played a role in the rapid spread of the explosions.

Video and photos of the stalls from previous years showed concrete-block enclosures with open dirt passageways between them; later photos showed the passageways filling up with fireworks and awnings.

On Dec. 12, the city of Tultepec issued a statement calling San Pablito “the safest market in Latin America.” It said 100 tons of fireworks were expected to be sold during the high season, which runs from August to New Year’s.

The city quoted Juan Ignacio Rodarte Cordero, the director of the state’s Fireworks Institute, as saying “the stalls are perfectly designed and with sufficient space between them to avoid any chain of fires.” City officials said the stalls were equipped with trained personnel, sand, shovels and fire extinguishers.

But during a recent visit to the market, little of that safety equipment could be seen. And when Tuesday’s explosion began, vendors and customers didn’t have time to look for it - or even, in many cases, to run.

Deadly fireworks explosions have also occurred elsewhere in Mexico: In 2002, a blast at a market in the Gulf coast city of Veracruz killed 29; in 1999, 63 people died when an explosion of illegally stored fireworks destroyed part of the city of Celaya; and in 1988, a fireworks blast in Mexico City’s La Merced market killed at least 68; and in 2013 a rocket struck a truck loaded with fireworks for a religious procession in Tlaxcala state, killing 17 people.