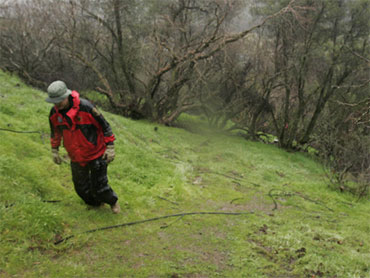 Not far from Yosemite's waterfalls and in the middle of California's redwood forests, Mexican drug gangs are quietly commandeering U.S. public land to grow millions of marijuana plants and using smuggled immigrants to cultivate them.

Pot has been grown on public lands for decades, but Mexican traffickers have taken it to a whole new level: using armed guards and trip wires to safeguard sprawling plots that in some cases contain tens of thousands of plants offering a potential yield of more than 30 tons of pot a year.

"Just like the Mexicans took over the methamphetamine trade, they've gone to mega, monster gardens," said Brent Wood, a supervisor for the California Department of Justice's Bureau of Narcotics Enforcement. He said Mexican traffickers have "supersized" the marijuana trade.

Interviews conducted by The Associated Press with law enforcement officials across the country showed that Mexican gangs are largely responsible for a spike in large-scale marijuana farms over the last several years.

Local, state and federal agents found about a million more pot plants each year between 2004 and 2008, and authorities say an estimated 75 percent to 90 percent of the new marijuana farms can be linked to Mexican gangs.

In 2008 alone, according to the Drug Enforcement Administration, police across the country confiscated or destroyed 7.6 million plants from about 20,000 outdoor plots.

Growing marijuana in the U.S. saves traffickers the risk and expense of smuggling their product across the border and allows gangs to produce their crops closer to local markets.

Distribution also becomes less risky. Once the marijuana is harvested and dried on the hidden farms, drug gangs can drive it to major cities, where it is distributed to street dealers and sold along with pot that was grown in Mexico.

About the only risk to the Mexican growers, experts say, is that a stray hiker or hunter could stumble onto a hidden field.

The remote plots are nestled under the cover of thick forest canopies in places such as Sequoia National Park, or hidden high in the rugged-yet-fertile Sierra Nevada Mountains. Others are secretly planted on remote stretches of Texas ranch land.

All of the sites are far from the eyes of law enforcement, where growers can take the time needed to grow far more potent marijuana. Farmers of these fields use illegal fertilizers to help the plants along, and use cloned female plants to reduce the amount of seed in the bud that is dried and eventually sold.

Mexican gang plots can often be distinguished from those of domestic-based growers, who usually cultivate much smaller fields with perhaps 100 plants and no security measures.

Some of the fields tied to the drug gangs have as many as 75,000 plants, each of which can yield at least a pound of pot annually, according to federal data reviewed by the AP.

The Sequoia National Forest in central California is covered in a patchwork of pot fields, most of which are hidden along mountain creeks and streams, far from hiking trails. It's the same situation in the nearby Yosemite, Sequoia and Redwood national parks.

Even if they had the manpower to police the vast wilderness, authorities say terrain and weather conditions often keep them from finding the farms, except accidentally.

Many of the plots are encircled with crude explosives and are patrolled by guards armed with AK-47s who survey the perimeter from the ground and from perches high in the trees.

The farms are growing in sophistication and are increasingly cultivated by illegal immigrants, many of whom have been brought to the U.S. from Michoacan.

Growers once slept among their plants, but many of them now have campsites up to a mile away equipped with separate living and cooking areas.

"It's amazing how they have changed the way they do business," Wood said. "It's their domain."

Moyses Mesa Barajas had just arrived in eastern Washington state from the Mexican state of Michoacan when he was approached to work in a pot field. He was taken almost immediately to a massive crop hidden in the Wenatchee National Forest, where he managed the watering of the plants.

He was arrested in 2008 in a raid and sentenced to more than six years in federal prison. Several other men wearing camouflage fled before police could stop them.

"I thought it would be easy," he told the AP in a jailhouse interview. "I didn't think it would be a big crime."

Stewart said recruiters look for people who still have family in Mexico, so they can use them as leverage to keep the farmers working - and to keep them quiet.

"If they send Jose from the hometown and Jose rips them off, they are going to go after Jose's family," Stewart said. "It's big money."

When the harvest is complete, investigators say, pot farm workers haul the product in garbage bags to dropoff points that are usually the same places where they get resupplied with food and fuel.

Agents routinely find the discarded remnants of camp life when they discover marijuana fields. It's not uncommon to discover pots and pans, playing cards and books, half-eaten bags of food, and empty beer cans and liquor bottles.

But the growers leave more than litter to worry about. They often use animal poisons that can pollute mountain streams and groundwater meant for legitimate farmers and ranchers.

Because of the tree cover, armed pot farmers can often take aim at law enforcement before agents ever see them.

"They know the terrain better than we do," said Lt. Rick Ko, a drug investigator with the sheriff's office in Fresno, California. "Before we even see them, they can shoot us."

Vast amounts of pot are still smuggled into the U.S. from Mexico. Federal officials report nearly daily hauls of several hundred to several thousand pounds seized along the border. But drug agents say the boom in domestic growing is a sign of diversification by traffickers.

Officials say arrests of farmers are rare, though the sheriff's office in Fresno did nab more than 100 suspects during two weeks of raids last summer. But when field hands are arrested, most only tell authorities about their specific job.

When asked who hired him, Mesa repeatedly told an AP reporter, "I can't tell you."

Washington State Patrol Lt. Richard Wiley said hired hands either do not know who the boss is or are too frightened to give details.

"They are fearful of what may happen to them if they were to snitch on these coyote people," Wiley said of the recruiters and smugglers who bring marijuana farmers into the U.S. "That's organized crime of a different fashion. There's nothing to gain from (talking), but there's a lot to lose."