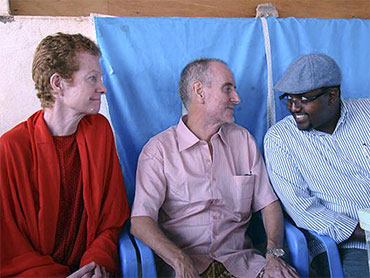 Mexico's government insisted Thursday that a black cartoon character with exaggerated features is a historical icon who deserves to be celebrated on a postage stamp — and that U.S. leaders charging racism do not fully understand Mexican culture.

The country's postal service this week released a series of five stamps depicting "Memin Pinguin," a child's character from a comic book started in the 1945 that is still published in Mexico.

In Washington, the White House objected, saying that "racial stereotypes are offensive no matter what their origin." The Rev. Jesse Jackson branded the stamp "an insult" and asked Mexico to withdraw it from the market.

Withdrawing the stamps would probably make them more desirable to collectors and increase their value, say U.S. collectors.

But Ruben Aguilar, a spokesman for President Vicente Fox, said the comic book has promoted understanding and family values for decades and deserved to be enshrined on a stamp.

"It seems strange to me that this celebration of Mexican culture and Mexico's post office's toast to Mexican cartoonists is misunderstood," he said.

Aguilar said the comic book was "not racist. It's exactly the opposite."

"I respect the reverend Jesse Jackson's opinion, but we think that he is uninformed about the historic role of this series in Mexican culture to combat racism and promote family values," he said.

It was the second time in as many months Fox's office has had to answer questions about perceived racial insensitivity. On May 13, the president sparked sharp criticism when he said that Mexican migrants living in the United States were willing to take jobs "that not even blacks want to do."

Jackson and the Rev. Al Sharpton traveled to Mexico City to meet with Fox and demanded that he apologize for that comment, but the president would not comply.

While calling the stamps an internal issue for Mexico, White House spokesman Scott McClellan was quick to denounce the stamp images, reports CBS News Correspondent Mark Knoller. McClellan said "racial stereotypes are offensive no matter what their origin" and such caricatures have no place in today's world.

Asked about the caricatures on the stamps, National Security Advisor Stephen Hadley said, "Our position is that there's no place for this kind of thing. It's wholly inappropriate — and we've made that clear."

Dark-skinned with an over-shaped head and lanky limbs, Memin Pinguin is drawn with thick lips, a round nose and wide-open eyes. His appearance, speech and mannerisms are the subject of kidding by white characters in the comic book.

Memin Pinguin's name combines a monicker for "Guillermo," or "William," and a slang form of an adjective meaning "mischievous." On the stamps, which sell for a bit more than US$0.60 apiece, is seen primping in a tuxedo and top-hat, marching off to school, and hawking comic books.

Carlos Munoz, a professor emeritus at the Department of Ethnic Studies at the University of California at Berkeley, said "people in the Fox administration, and perhaps even Fox himself, need a lesson in African contribution to Mexican history."

"It's a manifestation of the ignorance, of the racism that continues to exist in Mexican culture," Munoz said. "Mexico, like the USA, is a very racist society. Mexico has just been more successful at ignoring its African culture than the U.S."

A statement released by the Mexican Postal Service said that the Education Minister of the Philippines decreed the Memin Pinguin comic book required reading in 1985 because of its "promotion in the students of respect toward family and institutions."

It also said the comic "complies perfectly" with efforts "to promote values and national culture," adding that Memin Pinguin is "a nice, little motor-mouth who, thanks to his good humor and particular way of seeing the world, wins the hearts" of the comic's other characters.

Emoe de la Parra, daughter of Memin Pinguin creator Yolanda Vargas, said the idea for the character came during a visit to Cuba, when her mother became enchanted with the island's black youngsters.

"I'm very surprised that it has raised concerns, that it has bothered people and that it even has political relevance in negative terms," de la Parra told a Mexico City's W Radio, adding that "frankly, I think that's very wrong."

"I think that he is a person full of moral qualities and that his existence can't be offensive to anyone," de la Parra said.

Munoz said Mexicans tend to dismiss charges of racism as overreaction on the part of people in the United States — but only because of ignorance about the role African cultural played in the formation of modern Mexico.

"People don't understand and don't realize the consequences of the postage stamp," he said. "It's no big deal to them, it's just a cartoon character. But to me the stamp means ... that racism is alive and well in Mexico."