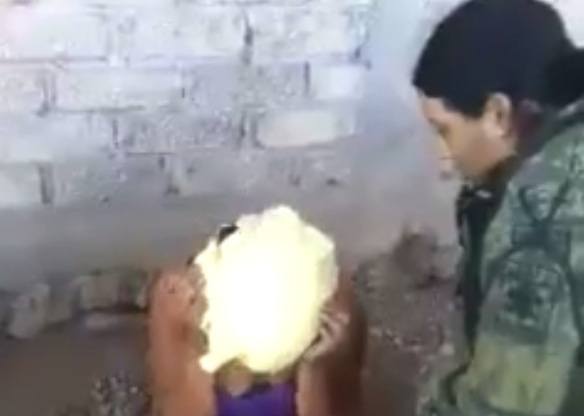 MEXICO CITY -- The Mexican army said Thursday that two of its soldiers face military charges after a video surfaced of them helping a federal police officer torture a female suspect.

A female military police officer is seen in the video interrogating the woman. She pulls her hair and places the muzzle of her rifle against the woman's head.

Later, a blue-uniformed federal police officer puts her head inside a plastic bag.

The Defense Department says the events occurred Feb. 4, 2015 in Ajuchitan, a small mountain town in southern Guerrero state. Opium poppy plantations are common in the area where drug cartels operate.

The federal police officer placed a plastic bag over the woman's head until she almost passed out. It is unclear if the police officer -- apparently also female -- faces charges.

Mexico's army said Thursday that the two soldiers are in a military prison facing charges of failure to obey orders.

The chilling, four-minute video shows the handcuffed woman sitting in the dirt, crying, outside a rural cinder-block house.

The female soldier asks her repeatedly during and after the torture, "Are you going to talk? Yes or no? Now do you remember?"

"Do you want more? Who is this damn Maria?"

As the suspect lies inert on the ground, the female soldier asks her "Do you remember now? Or do you want the bag again? Or water? Or (electric) shocks? Tell me what you want."

The military justice system acted much more quickly in the case than civilian prosecutors. The army said it found out about the video -- apparently taped by a police officer or soldier at the scene -- in December, and arrested the two soldiers in January.

Civilian prosecutors could not say whether any charges had been filed against anyone in civilian courts.

Raul Benitez, a security specialist who teaches political science at the National Autonomous University of Mexico, said "the military justice system tends to be very strict in such cases, because (the soldiers in the video) are casting the institution in a bad light."

But Benitez also noted the case was unusual in that the proof is so obvious and unarguable.

"There are abuses by soldiers, but there often isn't this kind of solid proof," said Benitez. "They are not accustomed to acknowledging such cases, unless the evidence is overwhelming."

The Americas director for Human Rights Watch, Jose Miguel Vivanco, said that "torture and inhuman, cruel and degrading treatment continue to be the traditional methods of 'investigation' and punishment in Mexico."

"As long as those directly responsible for these practices, and those who cover up for them, aren't brought to justice, there will never be any chance to combat or eliminate" torture, Vivanco said.

The army said that "ïn this case or any other case where military personnel abuse human rights, energetic and rigorous action will be taken against those responsible."

Warning: The contents of the video are graphic and may be disturbing for some viewers.

The video can be seen here.