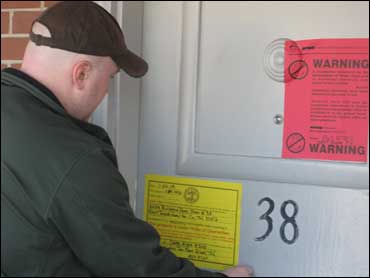 Methamphetamine "cooks" are secretly converting hundreds of motel and hotel rooms into covert drug labs - leaving behind a toxic mess for unsuspecting customers and housekeeping crews.

They are places where drug-makers can go unnoticed, mixing the chemicals needed for the highly addictive stimulant in a matter of hours before slipping out the next morning. The dangerous contaminants can lurk on countertops, carpets and bathtubs, and chemical odors that might be a warning clue to those who follow can be masked by tobacco smoke and other scents.

Motels can be an attractive alternative for drug makers seeking to avoid a police raid on their own homes.

"They can seize the trailer or seize your house but they can't seize a motel room," said Dr. Sullivan Smith, director of emergency services at Cookeville Regional Medical Center in north-central Tennessee.

U.S. Drug Enforcement Administration records obtained by The Associated Press show that states reported finding evidence of drug-making in 1,789 motel and hotel rooms in the past five years - and that's just those the authorities found.

Some cleanup professionals hired to make the travelers' havens livable again say most of their work is done on properties where a meth lab was discovered long after the fact.

The number of clandestine labs that are never found is difficult to pin down. There was a slight uptick in hotel and motel lab busts reported to the Drug Enforcement Administration in 2008 from the previous year, with 149 in 2006, 87 in 2007 and 127 in 2008. The tally was 461 in 2005 and 965 in 2004, before there were restrictions on purchasing over-the-counter decongestants often used as ingredients. The DEA count is based on states that reported labs.

The cleanups cost anywhere from $2,000 to $20,000. Even short-term exposure to vapors and residue where the drug is smoked or cooked can cause eye and skin irritation, vomiting, rashes, asthma problems and other respiratory issues.

"It probably happens all the time," said John Martyny, a National Jewish Medical and Research Center associate professor who is also an industrial hygienist and meth researcher. "The difficulty is, how do you make that attribution? You might think it is from cigarette smoking."

Martyny said health effects from long-term exposure to the drug making are not known because the clandestine labs did not become widespread until the 1990s.

The volatile labs can be set up in less than four hours inside a hotel or motel room, according to The American Hotel and Lodging Association.

Methods vary for making the drug, but the equipment can be simple enough to fit in a single backpack: A large soft drink bottle with some rubber tubing, duct tape, batteries, refrigerant packs and a decongestant that contains ephedrine or pseudoephedrine.

Regardless of the complexity, "You are going to leave behind meth and caustic or potentially hazardous chemicals," said Tommy Farmer, director of Tennessee's Methamphetamine Task Force.

"The smart ones come in about 10 o'clock at night and they make it all night and are out of there by 8 a.m," said Joseph McInerney, president and CEO of the association.

Environmental services specialist John Nale of Chattanooga, who is licensed to clean up meth labs, said tests he has conducted for buyers of motel properties have shown chemicals from clandestine labs that were never previously discovered and reported.

Joe Mazzuca, operations manager at Meth Lab Cleanup Co. in Post Falls, Idaho, said he has tested pricey hotel rooms in Idaho and Utah and discovered contaminants where no one previously suspected a meth lab had been.

"Seventy percent of the work the company does are properties that were never busted," Mazzuca said.

"It is very toxic stuff and they don't want to carry it around," Mazzuca said.

Nale said motel and hotel customers may be reluctant to speak up if something is suspicious. He's also careful not to use coffee pots and other items provided in guest rooms.

"It could be chemicals or you just don't know what has been done with those," he said.

McInerney, the hotel and lodging association president, said few meth labs are set up in hotels compared with the industry renting about 3 million rooms a day. He said operators typically are vigilant about monitoring for any meth problems.

In East Ridge, on Interstate 75 a few miles from Chattanooga, police last month uncovered one lab in the Cascade Motel. They posted a quarantine sign on the door of the room until the owner pays for a cleanup and the affected area is cleared for use.

Police investigator Josh Creel said he and other officers located the chemicals, tubing and glassware that were being used when they made the arrests at the Cascade Motel. He advised the manager to leave the door and window open for several days in preparation for the cleanup, which involved replacing many of the furnishings.

The motel manager, Pradip Patel, declined comment other than, "Our bad luck."