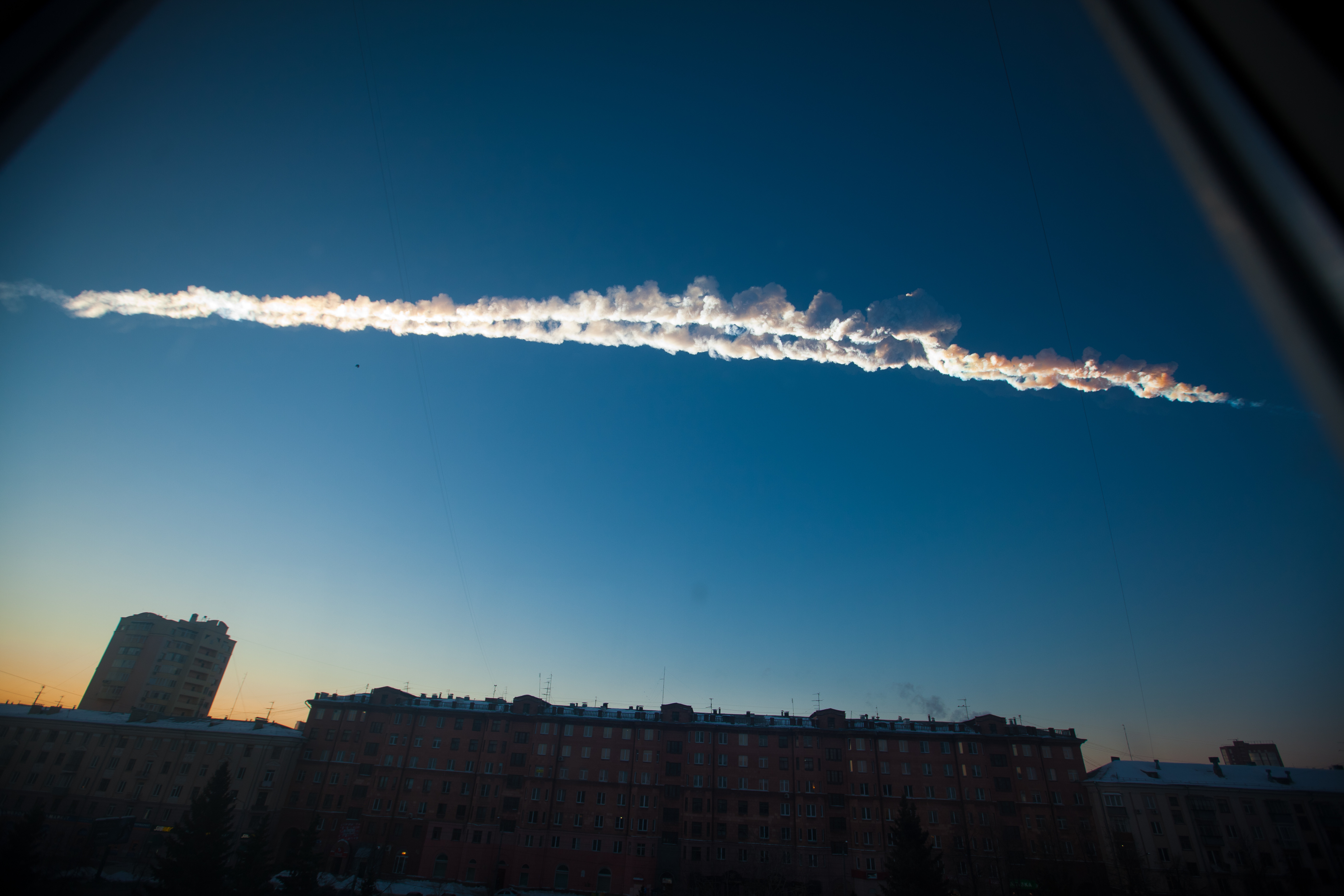 MOSCOW A meteor streaked across the sky and exploded over Russia's Ural Mountains with the power of an atomic bomb Friday, its sonic blasts shattering countless windows and injuring around 1,100 people.

The spectacle deeply frightened many Russians, with some elderly women declaring that the world was coming to an end. Many of the injured were cut by flying glass as they flocked to windows to see what the source was for such an intense flash of light.

The meteor -- estimated to be about 10 tons -- entered the Earth's atmosphere at a hypersonic speed of at least 33,000 mph and shattered into pieces about 18-32 miles above the ground, the Russian Academy of Sciences said in a statement.

Amateur video showed an object speeding across the sky about 9:20 a.m. local time, just after sunrise, leaving a thick white contrail and an intense flash.

"There was panic. People had no idea what was happening," said Sergey Hametov, a resident of Chelyabinsk, a city of 1 million about 930 miles east of Moscow.

"We saw a big burst of light, then went outside to see what it was and we heard a really loud, thundering sound," he told The Associated Press by telephone.

The meteor released several kilotons of energy above the region, the science academy said. The shock wave blew in an estimated more than 1 million square feet of glass, according to city officials.

The meteor hit less than a day before Asteroid 2012 DA14 made the closest recorded pass of an asteroid to the Earth -- about 17,150 miles. But the European Space Agency in a tweet said its experts had determined there was no connection -- just cosmic coincidence. The Asteroid passed Earth without incident at approximately 2:30 pm EST this afternoon.

The asteroid was invisible to astronomers in the United States at the time of its closest approach on the opposite of the world. But in Australia, astronomers used binoculars and telescopes to watch the point of light speed across the clear night sky.

"This is indeed very rare and it is historic," he said on NASA TV. "These fireballs happen about once a day or so, but we just don't see them because many of them fall over the ocean or in remote areas.

CBS News contributor Michio Kaku, a physics professor at the City University of New York, says the meteor was a classic example of Mother Nature "showing Hollywood who's boss." He said the meteor was about the size of a house.

The Russian meteor was probably about 6 1/2 feet across, about the size of an SUV, said Richard Binzel, a professor of Planetary Science at MIT.

The Interior Ministry said about 1,100 people sought medical care after the shock wave and 44 of them were hospitalized. Most of the injuries were caused by flying glass, it said.

There was no immediate word on any deaths or anyone struck by space fragments.

Meteors typically cause sizeable sonic booms when they enter the atmosphere because they are traveling so much faster than the speed of sound. Injuries on the scale reported Friday, however, are extraordinarily rare.

"I went to see what that flash in the sky was about," recalled resident Marat Lobkovsky. "And then the window glass shattered, bouncing back on me. My beard was cut open, but not deep. They patched me up. It's OK now."

Another resident, Valya Kazakov, said some elderly women in his neighborhood started crying out that the world was ending.

Lessons had just started at Chelyabinsk schools when the meteor exploded, and officials said 204 schoolchildren were among those injured.

Yekaterina Melikhova, a high school student whose nose was bloody and whose upper lip was covered with a bandage, said she was in her geography class when they saw a bright light outside.

"After the flash, nothing happened for about three minutes. Then we rushed outdoors. I was not alone, I was there with Katya. The door was made of glass, a shock wave made it hit us," she said.

Russian television ran footage of athletes at a city sports arena who were showered by shards of glass from huge windows. Some of them were still bleeding.

City officials said 3,000 buildings in the city were damaged by the shock wave, including a zinc factory where part of the roof collapsed.

The vast implosion of glass windows exposed many residents to the bitter cold as temperatures in the city hovered around minus 15.8 Fahrenheit.

The regional governor immediately urged any workers who can pane windows to rush to the area to help out.

Some fragments fell in a reservoir outside the town of Chebarkul, the regional governor's office said, according to the ITAR-Tass.

A 20-foot-wide crater was found in the same area, which could come from space fragments striking the ground, the news agency cited military spokesman Yaroslavl Roshchupkin as saying.

Small pieces of space debris -- usually parts of comets or asteroids -- that are on a collision course with the Earth are called meteoroids. They become meteors when they enter the Earth's atmosphere. Most meteors burn up in the atmosphere, but if they survive the frictional heating and strike the surface of the Earth they are called meteorites.

The site of Friday's spectacular show is about 3,000 miles west of Tunguska, which in 1908 was the site of the largest recorded explosion of a space object plunging to Earth. That blast, attributed to a comet or asteroid fragment, is generally estimated to have been about 10 megatons; it leveled some 80 million trees.

Scientists believe that a far larger meteorite strike on what today is Mexico's Yucatan Peninsula may have been responsible for the extinction of the dinosaurs about 66 million years ago. According to that theory, the impact would have thrown up vast amounts of dust that blanketed the sky for decades and altered the climate on Earth

Others quickly took to the Internet and put what they said were meteorite fragments up for sale.

The Russian-language hashtags for the meteorite shot into Twitter's top trends, and the country's lively blogosphere quickly reacted with black humor.

One of the most popular jokes was that the meteorite was supposed to fall Dec. 21 last year -- when many believed the Mayan calendar predicted the end of the world -- but was delivered late by Russia's notoriously inefficient postal service.

Others joked that the meteorite was par for the course for Chelyabinsk, an industrial town long held to be one of the world's most polluted areas. The area around Chelyabinsk is also home to nuclear and chemical weapons disposal facilities.

Vladimir Chuprov of Greenpeace Russia noted that the area where the meteor exploded was 60 miles from the Mayak nuclear storage and disposal facility, which holds dozens of tons of weapons-grade plutonium. He said the Russian government has underestimated potential risks of the region.

A chemical weapons disposal facility at Shchuchye in the Chelyabinsk region contains some 6,000 tons of nerve agent including sarin and VX, accounting for about 14 percent of the chemical weapons that Russia is committed to destroy.

The dramatic events prompted an array of reactions from prominent Russians.

Prime Minister Dmitry Medvedev, speaking at an economic forum in the Siberian city of Krasnoyarsk, said the meteor could be a symbol for the forum, showing that "not only the economy is vulnerable, but the whole planet."

"It's not meteors falling. It's the test of a new weapon by the Americans," the RIA Novosti news agency quoted him as saying.

"At the moment, neither we nor the Americans have such technologies" to shoot down meteors or asteroids, he said, according to the Interfax news agency.