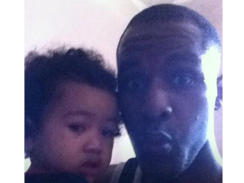 (CBS) WESTMINSTER, COLO. - Authorities in Westminster said a father fatally shot his 19-month-old daughter then turned the gun on himself after posting details about his motive and a photo of him and the little girl on Facebook, according to CBS Denver.

Merrick McKoy, 22, reportedly shot his daughter Mia at the girl's mother's apartment on Monday morning. When police arrived at the home they found both McKoy and Mia shot. The two were taken to Denver hospitals where the child was pronounced dead.

McKoy's condition has not been released, according to the station.

Authorities reportedly said a woman called police saying she woke up to her ex-boyfriend standing over her with a gun. The woman left the apartment after an altercation with McKoy and told police the he was locked inside with her daughter.

Police reportedly tried to get inside the residence as the man posted updates on Facebook about the couple's relationship and a photo of him holding his daughter.

Two of the Facebook postings included in a New York Daily News report read: "Don't judge me had no choice" and "I told I I can't live without u lol u thought I was joking now me n Mia out this b----."

CBS Denver reports the mother of the victim, whose name has not been released, had a restraining order against McKoy.