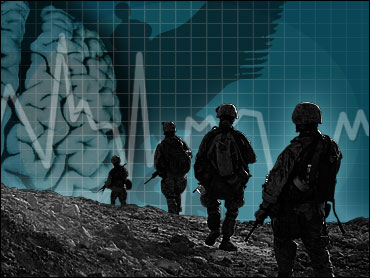 The U.S. military is putting already-strained troops at greater risk of mental health problems because of repeated deployments to Iraq and Afghanistan, a Defense Department panel says in warning of an overburdened health system.

The Defense Department's Task Force on Mental Health chaired by Navy Surgeon General Donald Arthur, issued an urgent warning, saying that more than one-third of troops and veterans currently suffer from problems such as traumatic brain injury and post-traumatic stress disorder. With an escalating Iraq war, those numbers are expected to worsen, and current staffing and money for military health care will not be able to meet the need, the group said in a preliminary report released Thursday.

The report found that 38 percent of soldiers, more than 30 percent of Marines and nearly 50 percent of National Guard members are returning with signs of post-traumatic stress, traumatic brain injury and other disorders after returning from deployment, reports CBS News correspondent Cami McCormick.

Those numbers are expected to grow because of repeated deployments and extended tours of duty.

In a related finding, the Pentagon reports that only 40 percent of Marines and 55 percent of Army soldiers in Iraq would report a member of their unit for killing or wounding an innocent civilian. In an internal military study of battlefield ethics in Iraq, officials said they also found that only a third of Marines and roughly half of soldiers said they believed that noncombatants should be treated with dignity.

In addition, the survey found that 10 per cent of soldiers and Marines mistreated civilians by hitting or kicking them and damaged property for no good reason, reports CBS News national security correspondent David Martin.

Martin reports that the Marine Corps works hard to teach ethics to its recruits. On a recent visit to Parris Island, Mike Brown, a drill sergeant asked a recruit, "Who thinks they know what in the Marine Corps we feel about honor?"

"Sir, this recruit believes that honor is doing the right thing when no one is looking, sir," he replied.

And now, for the first time, the military has hard data on how the values taught in boot camp stand up in combat conditions.

"This is the first time that questions of this nature have ever been asked of soldiers or Marines in combat," Maj. Gen. Gale Pollock, chief of the Army Nurse Corps, told reporters.

Branding Pentagon policies overly conservative and out-of-date, the mental health task force called for more money and a fundamental shift in treatment to focus on prevention and screening — rather than simply relying on soldiers to come forward on their own.

It cited a significant stigma in which soldiers believe they would be ridiculed or their careers damaged if they were to acknowledge having problems.

The four-page summary of findings, which will be incorporated in a final report to Defense Secretary Robert Gates in June, comes amid renewed attention on troop and veterans care following recent disclosures of shoddy outpatient treatment at Walter Reed Army Medical Center, the premier care facility for soldiers in Washington.

Paul Rieckhoff, executive director and founder of Iraq and Afghanistan Veterans of America, says the military must do something about the stigma attached to these problems and upgrade its system for psychological care.

"It's going to be expensive. That's the reality that we have to face. If we're going to run our military as hard as we are right now, we've got to allocate the resources to take care of the people who are in it," Rieckhoff told McCormick.

In recent weeks, several U.S. senators have pointed to problems in the Pentagon and Department of Veterans Affairs' mental health care — citing the Army's Fort Carson in Colorado, where some troops have said their pleas for mental health care went unanswered or were met with ridicule.

In its report, the task force — which visited 38 military bases in the four armed services within the past year — underscored many of the lawmakers' fears. Without citing specific examples, it said soldiers too often do not seek the care they need.

Both the VA and the Pentagon in recent weeks have acknowledged a need to improve mental health treatment. Jan Kemp, a VA associate director for education who works on mental health, has estimated there are up to 1,000 suicides a year among veterans within the VA system, and as many as 5,000 a year among all living veterans.