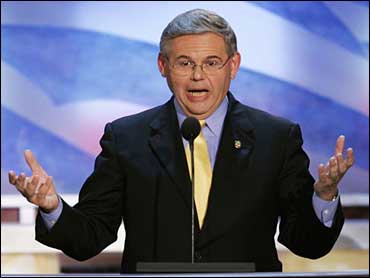 Menendez, the son of Cuban immigrants, becomes the third Hispanic in the Senate, joining Democrat Ken Salazar of Colorado and Republican Mel Martinez of Florida.

Corzine gets to choose his own successor because he will leave the Senate in January to take the job of governor of New Jersey and in that capacity can fill the Senate vacancy, reports CBS News correspondent Bob Fuss.

Corzine's Senate term only goes one more year, so New Jersey voters will be choosing another senator next November, though Corzine gave Menendez a big leg up in that race.

Menendez, 51, with his huge $4.1 million campaign war chest and status as the third most powerful Democrat in the House, was long considered the front-runner for Corzine's seat. National Democrats pushed for a solid candidate to keep the seat in the party's hands in the 2006 election, a post no New Jersey Republican has won since 1972.

"Bob is a fierce and articulate advocate. He's a man of integrity," said Corzine, who was elected last month. "He is eminently electable."

The only GOP candidate for the Senate seat so far is state Sen. Tom Kean Jr., whose father was governor of New Jersey and chairman of the Sept. 11 Commission.

Menendez, a seven-term House member, won't actually become senator until Corzine gets sworn in as governor.