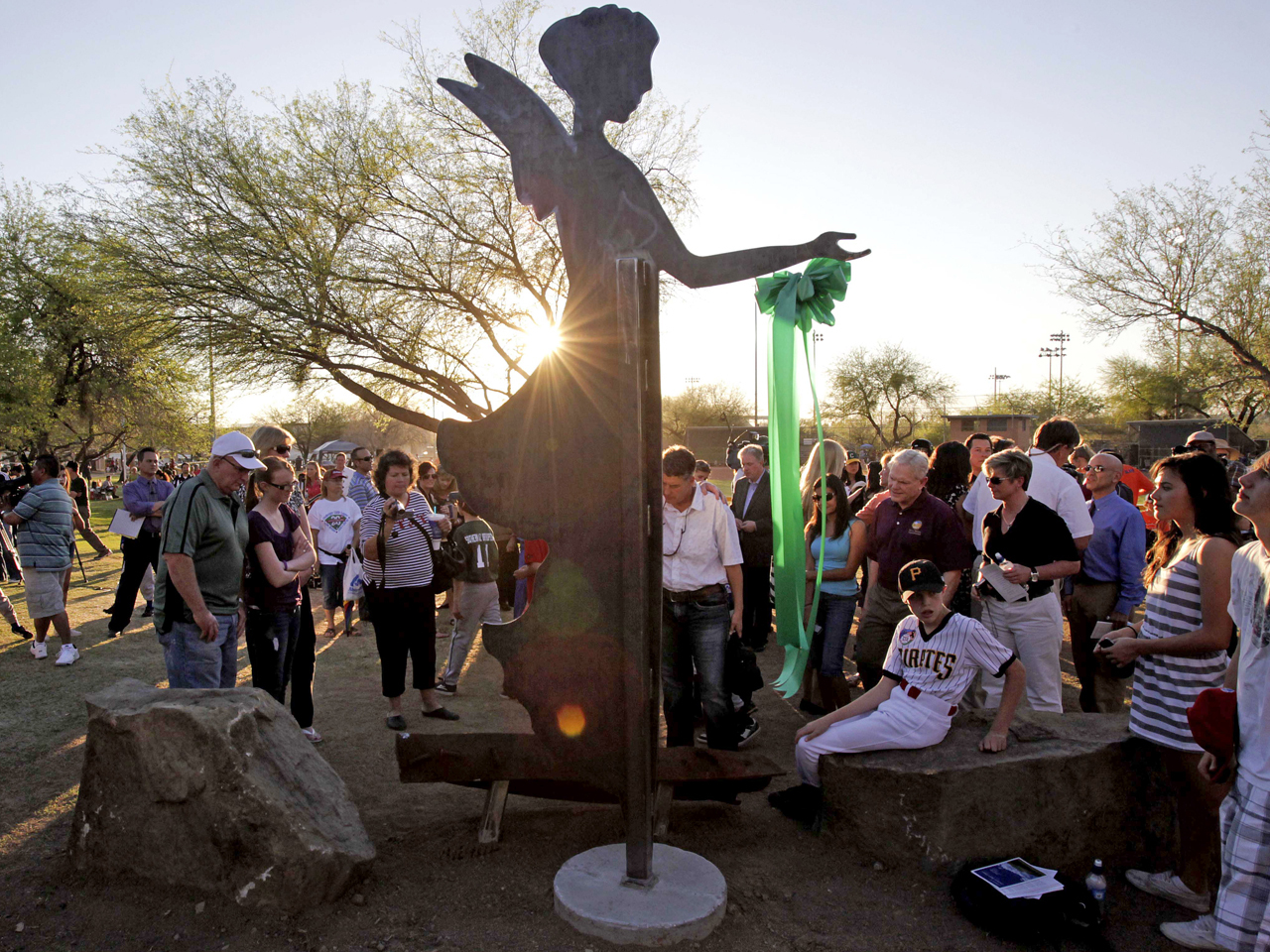 ORO VALLEY, Ariz. - The silver angel lies just beyond the outfield fence, overlooking the field where Christina-Taylor Green once scooped up grounders.

The 9-foot, 11-inch-tall statue was unveiled Friday evening before the Canyon del Oro Little League season opener Friday evening in honor of the youngest victim of the Tucson shootings.

Christina-Taylor's mother, father and brother watched as a fire truck pulled off a cover to reveal the glistening figure.

"It's going to serve as a daily reminder to us that we had the privilege of knowing Christina," said John Ward, who coached her for two years.

The angel's hand extends out, its robes appearing to blow in the wind — a symbol of peace after the Jan. 8 shooting that killed five others and wounded 13, including Rep. Gabrielle Giffords.

The statue's height holds added significance because the numbers 9 and 11 are prominent in Christina-Taylor's life. She was born on Sept. 11, 2001 — the day of the terrorist attacks — and was featured in a book about other children born that day.

Besides a 5 ½-foot long fragment of an I-beam from ground zero, the Freedom's Steadfast Angel of Love also incorporates a 3 ½-foot-long piece of steel from the Pentagon and a large rock from the Flight 93 crash site, sculptor Lei Hennessy-Owen said.

"It's beautiful," said shooting victim Susan Hileman, 59, who was holding Christina-Taylor's hand when a gunman opened fire at a meet and greet held by Giffords outside a supermarket. Hileman had taken her to the event because the little girl said she was interested in politics.

Hileman and other survivors also were planning to attend the ceremony at James D. Kriegh Park, where Christina-Taylor donned a forest green and bright yellow baseball uniform to play for the Pirates. On Friday, her father, John Green, spoke of how being born on 9/11 shaped who his daughter was, saying she was touched that on her birthday, the country waives its flags highest and remembers those who were lost.

"I think that's how she started forming her ideas," he said. "Unfortunately on Jan. 8 this year she lost her life. She's up there with God right now."

"We're very grateful that Christina meant as much to her community as she did to us," John Green said. "It's very humbling to look out and see what an impact our daughter has made in nine short years."

He and his family held each other in tears as they took in the statue for the first time before his son Dallas threw out the first pitch.

Before the unveiling, the family sat in the front row on the field as bagpipes played in the waning light of day. Christina-Taylor's mother, Roxanna, wiped tears away.

"It was very moving and touching for us both. We had goosebumps," Roxanna Green said. We're very proud and honored and pleased."

Ward, Christina-Taylor's coach, said he will always remember her as a no-nonsense, competitive player who had the team's most RBIs and became a leader for the other players — even though they were all boys.

Today, there are eight girls in the league, up from three last year. "I read that as Christina might have been a little inspiration," he said.

"In many ways, she led by example, being able to show the boys how to make a play, how to work hard, and she also led with her character," Ward said. "She was the first one to straighten out a rough issue. If there was an argument, she was like, `C'mon guys, let's play ball."'

It might not be all that surprising. Her father is a Los Angeles Dodgers scout, and her grandfather, Dallas Green, the no-nonsense manager who led the Philadelphia Phillies to their first World Series title in 1980.

Jack Ward, Ward's 8-year-old son who played with Christina-Taylor for two years, will be at first base this year and plans on remembering her in his own unique way.

"First base is pretty close to second base so every time I go out to first position I'm going to touch second," he said. "I think what's going to be on my mind is that she's an angel and she was really good."

He said when Christina-Taylor first joined the team he wasn't all that excited because she's a girl.

John Ward said Christina-Taylor proved her grit on the field one day when she was hit with a 40 mph fastball in the kidney area. She fell to the ground in pain.

"By the time I got there, she was back up, we dusted her off and there was a grimace on her face," Ward said. "I asked her, `What do you want to do — hit it or take your base?' And she said, `I want to hit!' She knew what she wanted to do before I ever got there."

If Christina-Taylor had taken the base, a runner on third would have walked in and scored. Instead, she took her turn at the plate, punching a hard line drive right up the middle and bringing in two runs.

"What sticks out most is just the smile on her face when she got to first base knowing she had done her job," Ward said.

In practices now, Ward said he has noticed a renewed focus from the boys, as they try to honor her memory.

They don't have to look far for a reminder of her.

When they see the patch on their uniforms and those of the league's other ballplayers, they will see her initials, CTG, on a baseball, the American flag and the twin towers of the World Trade Center in the background.

"The world looks a lot brighter today from my perspective than it did on the 9th of January," league president Clyde Turpin said.