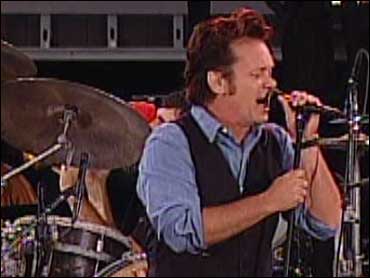 At 56, John Mellencamp has certainly earned his rock-star stripes. He was inducted into the Rock and Roll Hall Of Fame this year, has 22 albums under his belt, and a number of top 10 hits over a career that spans more than 30 years.

With his new album, "Life Death Love and Freedom," Mellencamp says he wants to focus on songwriting.

"It's in the American songbook tradition," Mellencamp told Early Show co-anchor Harry Smith. "You know, going back to the '40s and the '30s and looking at what material was written about then as opposed to what people are used to hearing songs written about now."

Mellencamp said that he wrote all the songs on the album in about two weeks.

"I got up and wrote," he said. "Sometimes, I would get a couple songs in a day and sometimes I would get nothing. But that's a very short amount of time to write that many songs."

Mellencamp said his choice of subject matter, which ranges from political to introspective, reflects a certain maturity.

"A lot of people think this is a dark record, but it's really about life," he said. "You can't talk about these things unless you have had a certain amount of life experience."

Life in America has long been one of Mellencamp's favorite subjects and songs like "Our Country" have been picked up by conservative politicians for their campaign events.

Mellencamp, on the other hand, supports Barack Obama.

"Well, conservatives are allowed to play whatever they like," Mellencamp said. "They should know it's coming from a very liberal person."