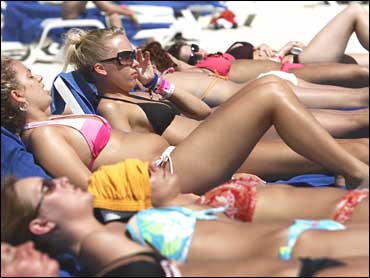 New research shows there's been a disturbing increase in melanoma among young women. In 1973, there were five-and-a-half cases per 100,000 women, ages 15-39. But by 1980, the rate had nearly doubled. And it went up another 50 percent by 2004. During that same time, the melanoma rate for young men leveled off. Melanoma is the most serious form of skin cancer. Sixty-two thousand new cases are reported each year in this country and more than 8,000 Americans die from it. CBS News anchor Katie Couric spoke with Dr. Jeanine Downie, a board-certified dermatologist, about the recent developments.

Couric: Dr. Downie, when I heard these numbers I thought "Has the sun gotten stronger? Are young women spending more time outdoors?" What's behind this disturbing trend?

Downie: It's really worrisome. The ozone level is thinning so because of that, the greenhouse gas emission, the sun is stronger. This is not our grandmother's sun. That's the first thing I want to stress. Young women have increased leisure time so a lot of people are spending a lot of time outdoors.

Couric: What about tanning salons? Are they behind this at all?

Downie: Tanning salons are huge. Let's say an average of one million people tan per day. And of that, 71 percent of tanning salon patrons are young women age 16 to 29. So there's the answer to your question because these new tanning booths, the ones with the high pressure tanning bulbs, they're 12 to 15 times the strength of the sun. So it's unbelievable the harm and the damage they can do. And if you expose yourself to tanning salons before the age of 39, you'll increase your risk of getting melanoma by I think it's 75 percent.

Couric: Well, we asked the Indoor Tanning Association for a statement or a reaction to this study and they said: "…[the] likely reason behind the rising melanoma rates is that more people are getting screened for the disease and that our ability to detect the cancer earlier and more often has improved."

What do you think of that explanation?

Couric: We also hear lately the importance of getting vitamin D from the sun. So we're getting a lot of mixed messages in terms of sun exposure. What would you advise people to do?

Downie: America is not a nutritionally depleted country. If anything, Americans tend to be heavy. So we can get vitamin D from our diet and if not we can get it from nutritional supplements, i.e. vitamins, and that would be fine. That's what I recommend.

Couric: What should people look for in terms of the early signs of melanoma?

Downie: So you want to look for a darkly pigmented mole on your body. So just a regular mole and then you say, "Hmm, that doesn't fold back on itself; I can no longer put a line through it." That means it's asymmetrical. There are many moles where the borders are irregular. If they look scalloped, that's a problem.

Couric: You should get your skin checked once a year at least, correct?

Downie: And if you have a history of melanoma, it should be two or three times a year.