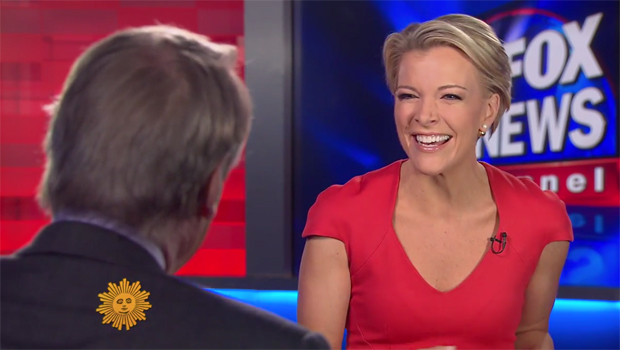 Megyn Kelly is a Fox News anchor who finds herself very much IN the news this campaign season, and it all began with a single exchange at a Republican presidential debate. Our Cover Story is reported by Charlie Rose of "CBS This Morning":

It may be one of the most unforgettable moments of this campaign: At the very first Republican debate back in August, Fox News anchor Megyn Kelly posed this question to candidate Donald Trump:

Kelly: "You've called women you don't like 'fat pigs,' 'dogs,' 'slobs,' and 'disgusting animals.' Does that sound to you like the temperament of a man we should elect as president?"

Trump: "What I say is what I say. And honestly, Megyn, if you don't like it, I'm sorry, I've been very nice to you, although I could probably maybe not be, based on the way you have treated

It was a question that changed her life.

Rose asked, "When he answered the way he did, tell me what was going through your mind."

"I perceived it as a veiled threat," Kelly said. "Because he said he might not be nice to me after this debate."

And for the past eight months, Trump has "not been nice" to Megyn Kelly over and over again:

At Marshalltown, Iowa: "I'm not a fan of Megyn Kelly. I think she's a third-rate reporter."

On a CNN interview: "I don't like her. She doesn't treat me fairly."

Kelly has never directly responded to Trump's attacks. But she stands by her question on his attitude about women.

"What I was trying to get at was the weaknesses of each of these candidates, if they were to become the general election candidate," she said. "Charlie, this was coming whether I showcased it in the debate or not."

"But you've become part of the story, too."

"Right. That's been unfortunate. That was never my goal. That's never a newsperson's goal. And yet it was the case."

"But you've gotta like being on the cover of Vanity Fair?"

"Yes. I mean, listen, I would be lying if I said it wasn't cool to see myself on the cover of Vanity Fair, right? It's, like, what am I doing there? This is bizarre."

Even before Trump made her a household name, her show, "The Kelly File" on Fox News Channel, was one of the most-watched programs in cable news, second only to Fox's "The O'Reilly Factor."

When asked who her audience is, Kelly said, "The viewer I picture in my mind when I do 'The Kelly File' is a woman who's had a long day, either with the kids or at work, or both. She sits down, she gets her glass of chardonnay, she wants to consume the news effortlessly, enjoy it, and not have to work too hard for it."

Her two million-plus viewers tunes in to see a self-described "independent" with a reputation for asking tough questions to anyone, Democrat and Republican alike.

"So, is there great relish on your part when you take somebody down?" Rose asked.

"I don't wanna take anybody down, but if you come on the show and lie or obfuscate or spin in a way that's dishonest, there I am to stop you."

Megyn Kelly grew up, Catholic and middle-class, near Albany, New York. "I never really had huge aspirations. I remember my mother used to say to me, 'You know, they don't give scholarships for cheerleading, Megyn.'"

Life took on a new urgency at 15 when her father died unexpectedly. "Devastating, and sudden, and just like a nuclear bomb going off in the family. My memory is I went up to my bedroom and went to sleep, and the next thing I knew, my sister was waking me up saying, 'Wake up! Daddy had a heart attack!'"

After high school she set her sights on journalism at Syracuse University's Newhouse School, but was rejected. So she went on to study at Albany Law School, and by her early thirties, Kelly was a litigator at one of the nation's top firms, Jones Day.

"I was working like a dog," she said. "And I really worked 16-hour days, 18-hour days all the time. And it wasn't that the firm made me do that; it was that I was making myself do it."

Because? "Because I was competitive; I wanted to win. I never felt that I had the natural intellectual gifts that the people who graduate first in their class from Harvard Law had."

But Kelly never forgot her first love. While still working at Jones Day, she wrangled a part-time job as a local reporter in Washington, D.C.

"Better than here" was Fox News Channel. She joined in 2004.

Her legal skills -- along with a willingness to take on some of America's big-name conservatives -- quickly made Kelly a rising star.

Kelly doesn't hold back, and she's equally aggressive in her defense of Fox News.

"I did, and do, believe that there is a left-leaning bias in news, in most of news," she said.

"No, I don't. I think that Fox News is fair and balanced. And I think the conservatives who are on air here make no bones about their ideology."

"But does Fox News have a closer relationship with Donald Trump, with the Republican Party, than it does with liberals and the Democratic Party?"

"Well, I think that's obviously true, because you see Trump on our air every day."

Kelly admits that Trump's attacks have boosted her profile -- and no one agrees more than Donald Trump:

"I might the best thing to happen to her," he said on CNN. "Who ever even heard of her before the last debate?"

Kelly said, "One of our babysitters is from Peru. And she came home one day and told us that she saw my name in the Peruvian papers. I don't think that ever happened before this particular dustup. So I'm gonna have to give him that point!"

But there are fears that have arisen from all the attention: "It's not so much what he writes or says; it's how he gins up anger among so many," Kelly said. "So it manifests in my life in several ways."

"Have there been threats against your life?" Rose asked. "Does that concern you?"

"It's not like I'm worried someone's actually going to come shoot me down. But I do worry someone's going to try to hurt me in the presence of my children."

Still, the 45-year-old Kelly, and her husband, author Doug Brunt -- parents of three children under seven -- seem to take it all in stride.

When asked how he has been affected by "this Trump stuff," Brunt replied, "It is frustrating. I think one of the thing's that's been most frustrating for Donald is that he has not been able to get a rise out of her even though he repeatedly tries to do so. For me, he gets a rise out of me, for sure."

Rose asked Kelly, "Some think about this, and they look at it, and they say, 'Why her?'"

"I think it's very clear to him that he cannot control the editorial on my show, or from me, in a debate or other setting."

"I wouldn't want to speculate beyond that," she said.

"If on Monday, Donald Trump says, 'I want to come on your show,' would you say, 'You're welcome. Come on. We have a spot for you'?"

"And it does not require an apology from him?" asked Rose.

"Oh God, no. No. He does not have to apologize. We'd have to discuss something about the dynamic that's --"

"And what would you say to him about it?"

Especially when Trump appears often on other Fox News programs. In January, on Bill O'Reilly's show, he was at it again:

"I have zero respect for Megyn Kelly. I don't think she's very good at what she does. I think she's highly overrated."

Rose asked, "Did you expect Bill to defend you?"

"I mean, I wish he had defended me more in that interview," Kelly said. "I would've defended him more."

"I think Bill did the best he's capable of doing in those circumstances."

"Listen, as Bill is fond of saying, I would've handled it differently. What can I say? It was a dark moment."

Fox News has repeatedly defended Kelly, saying in a statement just last month that Trump has an "extreme, sick obsession with her."

Obsessed? "Well, I think they were referring to the nonstop nature of it," she said.

But Fox also recognizes that Kelly is a major talent: it's giving her a bigger platform next month -- a primetime special on the Fox broadcast network.

When asked if she worries that this could all end, she replied, "Yes. Of course. I like to go big. I am not a worrier, I am a catastrophizer. I don't waste time with the small stuff. I like to go -- you know, one bit of turbulence on the plane, 'This is it!'"

"When you think about your future," Rose asked, "What do you want?"

"To keep growing," Kelly said. "I mean, I'm not saying I want to leave Fox News. I'm saying I want to add to what I'm doing. But I have to figure it out, Charlie, because I don't want to take away more time from my family."

"Certain people have found the perfect show for themselves. What's the perfect television show for Megyn Kelly to do?"

"How about if we merge a little Charlie Rose, a little Oprah, and a little me all together? And we serve that up as an hour? Wouldn't you watch that?"