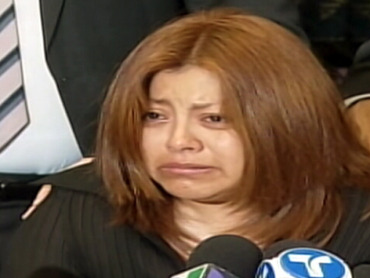 Santillan's lawyer, Gloria Allred, alleged that Santillan was "exploited, disrespected, humiliated and emotionally and financially abused" by Whitman and her family.

In the press conference, Santillan and Allred claimed that Whitman was aware of her immigration status during her nine years of employment with the Whitman family, and may have understood that she was vulnerable because of it.

Allred said that she has documents that would prove what Whitman knew when about Santillan's immigration status.

Whitman's camp denied the accusations. The candidate issued a statement, maintaining that she was unaware that Santillan was an undocumented worker.

"After 9 years of faithful service, Nicky came to us in June 2009 and confessed that she was an illegal worker. Nicky had falsified the hiring documents and personal information she provided to the employment agency that brought her to us in 2000. Nicky told me that she was admitting her deception now because she was aware that her lie might come out during the campaign. Nicky said she was concerned about hurting my family and me."

"As required by law, once we learned she was an illegal worker, I immediately terminated Nicky's employment. It was one of the hardest things I've ever done," Whitman wrote. "I considered Nicky a friend and a part of our extended family. I am deeply worried about Nicky and her family. I believe Nicky is being manipulated by Gloria Allred for political and financial purposes during the last few weeks of a hotly contested election."

Records given to TMZ by the Whitman campaign indicate that Santillan did falsify information on her employment records.

But the issue that will turn off Hispanic and others in California considering a vote for Whitman isn't so much what she knew when, but what she did after she knew.

If Whitman considered Santillan a part of her extended family, completely washing her hands of Santillan after nine years upon hearing she was an undocumented worker can be viewed  as an uncaring billionaire trying to avoid a housekeepergate situation as she considered running for public office.

Firing Santillan, as Whitman said the law required, cutting off communication and apparently making no effort help her obtain an immigration lawyer gives Allred a license to describe Whitman's actions as "cold and heartless treatment of a hardworking Latina."

Whitman "treat me as if I was not a human being," Santillan stated, adding that the Whitman was "throwing me away like a piece of garbage."

Those words and descriptions will be difficult for Whitman to shed. She will need to address the situation, and do it in a way that doesn't further the image of her as inhumane to the plight of her nine-year employee.

So far Whitman has poured nearly $120 million of her own money to help with the governship of California. Money won't help much in escaping this emotionally-charged dilemma.

Responding to questions about Santillan's allegations following a campaign appearance Wednesday, Whitman said, "She's [Nicky] the nicest woman and did a great job....Everything Gloria Allred is saying is absolutely a lie."