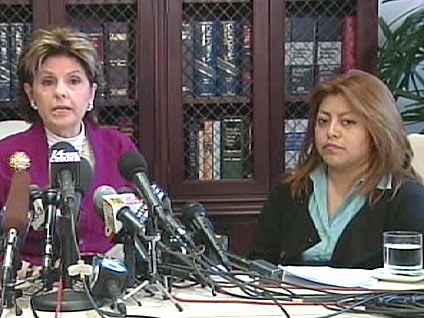 Former Meg Whitman housekeeper Nicky Diaz Santillan and her lawyer, Gloria Allred, held a press conference today in which they took issue with Whitman's claims that Diaz Santillan was being manipulated by Allred and Democratic opponent Jerry Brown.

"I'm not anyone's puppet," Diaz Santillan said at a televised conference held in Allred's office. "I really thought about it before I decided to speak out; I knew the risk of speaking out. But despite my fear I decided to come out from the shadows. I'm not doing this only for me but also for all the people who are taken advantage of by their employers."

"Meg Whitman was wrong when she said someone put a gun to my head - nobody did," Diaz Santillan added, referring to comments Whitman made in a press conference on Friday. "I want to be heard. I want the people who clean houses and do the jobs that others don't want to to be treated with respect and dignity."

Diaz Santillan also denied Whitman's allegations that the two enjoyed a close relationship during the nine years she worked for Whitman.

"Meg Whitman: Don't say I was part of your family -- because you never treated me like I was," Diaz Santillan said.

"The truth is that Nicky never asked or expected to be part of Ms. Whitman's family," said Allred. "She expected nothing other than to be treated as an employee, and to be treated fairly."

Allred acknowledged to a reporter that no charges had been filed against either Whitman or her husband. She would not say how Diaz Santillan's case had been referred to her, citing the policy of her law firm.

Will Allegations from Meg Whitman's Housekeeper Hurt Her in November?