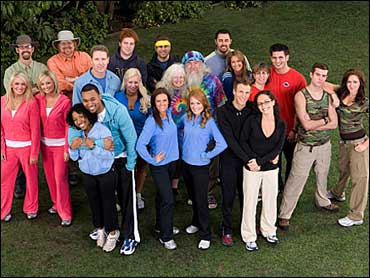 An ex-NFL player and his estranged wife, a former Dallas Cowboys cheerleader and her actor brother, recent divorcees, a pair of Southern belles and fraternity brothers are among the 11 two-person teams hurrying for the finish line - and the $1 million grand prize - on the upcoming 13th edition of CBS' "The Amazing Race."

"I love the fraternity brothers because they're so young and such a contrasting team," host Phil Keoghan recently told The Associated Press. "One takes his time to think things out. The other one loves to rush and go at a million miles an hour. There's definitely tension between the two of them while they're making decisions during the race."

Another team competing is geeky best friends Mark Yturralde, 41, and Bill Hahler, 42. The Comic-Con treasurer and student aid administrator from San Diego have been pals for over 20 years and have auditioned for "The Amazing Race" since the long-running reality series' third season. The superhero and gaming aficionados said they left their toys at home during the race.

"We've got really teeny backpacks," said Hahler. "They are small. We wanted to make sure that there wasn't anything to prevent us from putting that pack underneath the seat in front of us when we got on a plane. We didn't want something to happen where we got delayed because of our luggage. We thought that would help us go faster."

"We did extensive research on what to wear - what was lightweight and would help us move the fastest," added Yturralde. "I think it was the longest I ever went without wearing a logo on my T-shirt. If you see me on the street, I'm usually wearing a Superman, Bizarro or Batman T-shirt on a constant basis, but we had to utilize more multi-use clothing for 'The Amazing Race."'

Married beekeepers Anita, 63, and Arthur Jones, 61, from Eugene, Ore., are the oldest - and perhaps most colorful - team on this season of "The Amazing Race." Among the self-described hippies' mottos: "Don't worry, be hippie" and "The hokey pokey is what it's all about." Before the race, the Joneses worked out in hopes of keeping up with the other teams.

"We both tried to do some training, along the lines of going down to our little gym, but that was pretty much it," said Anita. "We have an emerging farm, so we do a lot of work out there, splitting wood and taking care of the horses. We're pretty physical, so we thought, 'Hey, we can be in there with everybody else. It'll be fun."'

Starting at the Los Angeles Memorial Coliseum, the 13th season of the Emmy-winning reality competition (premiering Sept. 28 at 8 p.m. EDT) will follow the teams as they travel over 30,000 miles in 23 days to countries such as Brazil, Bolivia, Russia, India and Kazakhstan. It's the first time the series visited the landlocked country lampooned by Sacha Baron Cohen in "Borat."

"We shot most of that episode in the capital," said executive producer Bertram van Munster. "People were a little afraid we were going to pull a 'Borat' on them. I told them we weren't doing 'Borat,' but what happened there is very, very funny. It's not easy to shoot in places like that because they practically have no television industry."

Van Munster, who is currently scouting locations in Asia for the 14th season, promised the 13th season will include a series of firsts for the reality competition, including a mistake that ultimately prohibited one team from joining their fellow racers at the finish line, as well as a memorable first-ever stop for "The Amazing Race" in Cambodia.

"The teams have no idea how to get from Point A to Point B there," said van Munster. "They don't know the language. It's very difficult to get through this country. They get so stuck, but they find so many fascinating solutions of how to get through everything. One of the things the teams do there is go to a real-life floating village. It's insane."

Viewers shouldn't expect to witness the around-the-world shenanigans in high definition, according to van Munster. While the upcoming Gabon-set season of CBS' "Survivor" will be broadcast in HD for the first time, "The Amazing Race" co-creator said the network hasn't decided on a similar stance for the often on-the-bubble show.

"I don't think it's a priority," van Munster said. "We're just happy to continue making the show as it is."

Teams At A Glance