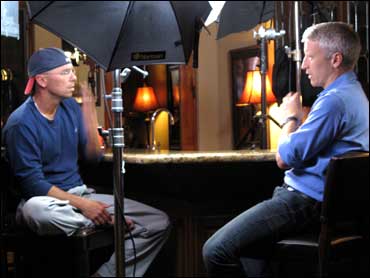 Country music singer Kenny Chesney grew up in a Tennessee town of less than 1,000, is barely 5'6" tall, weighs just 143 lbs. and is balding, to boot. Yet according to Billboard and Pollstar magazines, over the last three years, no one in music—not Madonna, not U2, not the Rolling Stones—have sold more concert tickets in America than the 39-year-old singer.

As CNN's Anderson Cooper reports for 60 Minutes, last year alone Chesney made $76 million on tour. While some know of him from the tabloid coverage of his brief marriage to actress Renee Zellweger, his small town roots and hybrid sound of country, rock and island music have earned him a reputation as America's Hillbilly rock star.


To find out why Kenny Chesney has become so popular, Cooper caught up with him last summer in Detroit.

With a small video camera in tow, the 60 Minutes team joined him as he was preparing to go onstage. He begins hidden in a road case, rolled into the middle of the stadium, through an unsuspecting crowd.

"I make these guys roll this case out like three or four times a night to get the crowd used to seeing it," Chesney says.

Chesney tours relentlessly. He has played nearly 1,500 concerts over the last 13 years.

"Ok, we're officially in the middle of the stadium now," Cooper remarks, rolling along inside the case. "I gotta tell you, sitting in here, I always thought being a rock superstar was really glamorous."

"It's not that glamorous, it really is not," Chesney says.

With a knock as the signal they have arrived, Chesney crawls out of the box and into a cramped waiting room. "I'm gonna come up and I'm gonna be in the middle of this football stadium. Pretty powerful stuff, man," he says.

When Chesney finally appears, the crowd erupts. For the next two hours, he is constantly in motion.

His songs are as much classic rock as they are classic country. He sings not about whiskey-soaked heartache but about first love, best friends, milestone moments that make up everyday life in America.

"I love the fact that I can go out there on stage with a guitar and sing a song that means something to somebody," Chesney says.

"Someone said to us about you that you're committed to the dignity of small-town America," Cooper remarks.

"It sounds like a cliché, but it…you do sing about what you know about. And I grew up in a small town, and I grew up in a place where your whole world revolved around friends, family, school, and church, and sports. And that's it. And I loved that," he tells Cooper.

Chesney also loves the Caribbean and there's an island vibe in much of his music and his videos. Like Jimmy Buffet, Chesney is selling a beach party lifestyle his fans embrace.

Often, he even joins the afternoon tailgating that is part of the Kenny Chesney concert experience. And backstage it's more of the same, there are a couple of fully stocked and well-used bars. Even the production office is in a Tiki hut.

Among the eight busloads of roadies and 17 semi-trucks of equipment Chesney tours with, there's one 18-wheeler full of nothing but Caribbean props.

"Critics will say, 'Well, look. You are an invention of marketing in some ways.' That you created this image, created this lifestyle brand around it. And that's as much as a part of your success as the music," Cooper says.

"I do sell fun. I know we do that. There's no doubt about it," Chesney says. "And I will admit that I have allowed my love for the tropics to get into my music. "

Asked how he sells fun, Chesney tells Cooper, "Every night, when I'm on stage, and I do a song called 'No shoes, no shirt, no problems' and every night I told them, I said, 'I know we've all got problems. Whatever is going on in your world, don't think about it for the next two hours and just have some fun, and let's listen to music.' And yeah, I marketed that. I'm…I promise you."

It has worked so well, Chesney can now afford to call the U.S. Virgin Islands his home for several months each year. He first came to St. John to shoot a video eight years ago.

He's now in his third home, and is a fixture with the locals. In the restaurants and bars, he's a regular.

But oddly, his favorite spot is the back alley of a burger joint. He calls it "the executive suite."

"Back here with propane tanks, ice makers, brooms," he says. "For some reason or another, I feel so relaxed back here, and I know. It's odd. And I love it, man. I mean it's almost like, it's therapy for me to come back here and just sit."

"If this is the executive suite, what does it say about the corporation?" Cooper asks, with a reply of laughter.

The "corporation" was formed in the hill country north of Knoxville, Tenn. In high school, football and baseball consumed him. But when he got to college at East Tennessee State, he started playing guitar cover songs in the bars around campus.

"I had a tip jar and on the front of the tip jar sitting on a stool, it says: 'Tips welcome. But anything by James Taylor, Jimmy Buffet, or especially Free Bird, is $25.' Because I was so sick of hearing it," Chesney remembers.

"Everyone wanna hear 'Free Bird' or 'Buffet!' You know or whatever. And I loved those guys, too. So I hope they're not too mad at me. And people would get drunk, though, and pay it," he says.

After college, he got a record contract but didn't get noticed much. That is, until he took a chance on a song even he admits is silly. The title: "She Thinks My Tractor's Sexy."

"I knew that a lot of people that grew up just like I did would go crazy over it. But it was a song that was…there was no gray area with that song. Either you loved it or you hated it. You know what I mean? But it was a great groove," Chesney remembers. "I was smart enough to record that song but I was smart enough also not to record another one."

As it turns out, Chesney actually has two tractors but says they are "not one bit" sexy.

His down-home sensibilities are no act. When he finally made it big, Chesney decided to celebrate success the best way he knew how. At end of his 2003 tour, he took his friends and road crew on vacation to St. John.

"And I leased out the Hooters corporate jet. It had Hooters on the side. Had, 8:30 in the morning, we had Hooters girls in there dressed in a uniform, in their uniforms. We had curly fries, we had hot wings, we had beer. And the whole plane was full of that," he recalls.

The trip has become a tradition. At tour's end last September, he upped the ante, giving all 100 members of his crew bonus checks of nearly $14,000.

By the time they arrived in St John, the party was well underway.

For Chesney however, the celebration was bittersweet—just seven months earlier he had been reluctant to go on tour at all.

"To be honest with you, Anderson, I just wasn't ready to go do it. You know, with everything that happened in my personal life it was an awful period for everybody," he says.

Chesney is talking about his relationship with actress Renee Zellweger. They met in January 2005, married in May, and split in September. It seemed they had no chance from the start.

"I remember coming back from the wedding and we landed in Little Rock, Arkansas. I had a show. We didn't have a honeymoon, you know? Welcome to Little Rock, baby. Happy Honeymoon," he says, laughing.

The marriage ended before the tour did. Zellweger insisted on an annulment, not a divorce. On the paperwork she cited fraud, igniting months of Internet and tabloid speculation suggesting Chesney was gay. Rumors he initially refused to comment about.

"Maybe I should have come out and said 'No I'm not,' but I didn't want to draw any more attention to it, you know, cause I knew I wasn't and I didn't have to prove to anybody that I wasn't, you know, I didn't feel like I really did," Chesney tells Cooper. "It's not true. Period."

Asked why Zellweger cited fraud, Chesney says, "We thought was the least harmful was fraud cause it's kind of broad, whatever it is. Doesn't specify. And, boy, didn't, we were wrong. But, it's okay. The only fraud that was committed was me thinking that I knew what it was like. That I really understood what it was like to be married and I really didn't."

Chesney says he has no regrets about getting married. "Not one bit. Even though I'd sit here and say 'I wish we'd gotten divorced instead of all that annulment stuff' and saved me a lot of public humiliation and I still don't have any regrets. I mean…I loved her, you know? And it was real."

He says he wants to try marriage again. He would like to have kids, but for now, the road is where his life and his career are. When one tour is ending, Chesney is already planning the next one.

"You are obsessive compulsive about planning, and what comes next. And keeping it going," Cooper remarks.

"I am. I'll admit I'm a workaholic," he says. "Because I'm constantly thinking how I'm gonna do it better."
Produced By John Hamlin