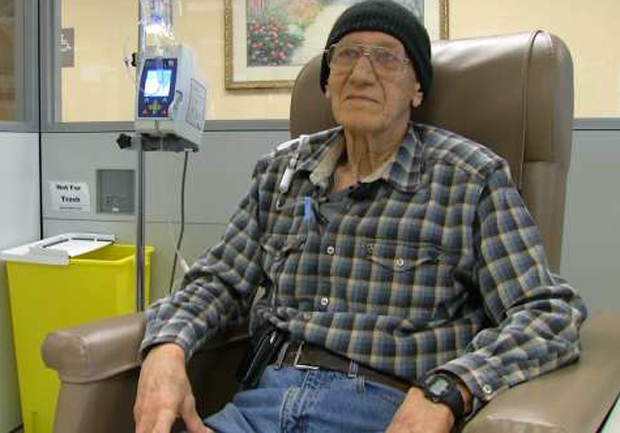 Medicare patients are scrambling to find new places for cancer treatment because clinics hit by sequester budget cuts are turning them away.

Oncologists nationwide say that since the cuts went into effect April 1, they have been unable to administer expensive chemotherapy drugs and still stay in business.

Jeff Vacirca, chief executive of North Shore Hematology Oncology Associates in New York, told the Washington Post that his clinic is being forced to turn away about one third of their 16,000 Medicare patients.

"A lot of us are in disbelief that this is happening," Vacirca told the Post. "It's a choice between seeing these patients and staying in business."

During the negotiations that triggered the sequester, lawmakers tried to shield Medicare, one of the most politically sensitive forms of entitlement spending. Indeed the 2 percent reduction in Medicare payments is just a fraction of the cuts to other federal programs.

But according to the Post, oncologists usually are reimbursed for not only the price of the chemotherapy drug but also an additional 6 percent to cover the cost of storing and administering the drug. Since doctors cannot change the price of the medication, they say the sequester cuts will actually come out of the overhead cost, thereby multiplying the financial impact.

Workers are resigning at record rates. That's good for economy

Kent Butcher, the CEO of Oklahoma Oncology, told CBS affiliate KOTV that the cuts are preventing doctors at community care clinics like his from providing drugs that cancer patients rely on.

"They're trying to reduce the budget and I understand that probably has to happen," Butcher said. "What we're trying to do is say, 'Don't do that on the backs of cancer patients.' "

A recent survey by the Community Oncology Alliance found that 72 percent of the community oncology practices across the country would change the way they deal with Medicare patients if the cuts continue.

Calling it an "unjust and devastating cut to cancer care," COA launched a petition of the cuts on the White House site.

At least one private cancer clinic in Manchester, Conn. has stopped seeing Medicare patients altogether, according to WTNH-TV.

"This is not a place where sequestration should have touched, is the health and well being of people," said Eric Berthel of the Eastern Connecticut Health Network.

"You can't take it out on the people that are sick. I don't know where you get it from," he said. "I'm not in the government but these politicians..."