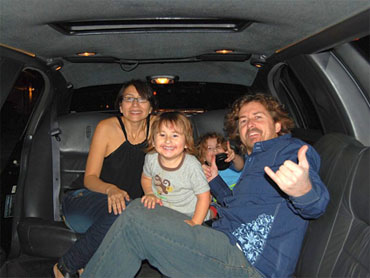 The San Diego County Sheriff's Department said Tuesday that it pursued hundreds of leads to find Joseph and Summer McStay and their two young sons. The investigation is being turned over to the FBI due to the agency's experience working outside the United States.

The McStays disappeared in February 2010. Investigators found rotten eggs on the kitchen counter and two cereal bowls full of popcorn in the living room of the family's Fallbrook home.

The family left behind their dogs, $100,000 in the bank and no clues as to where they were going, or why, according to CBS affiliate KFMB.

Four days after the family vanished, their SUV was parked at a San Diego shopping mall, just steps from Tijuana, Mexico. A dark surveillance video showed four people walking across the border that night - however, a family member did not believe the individuals shown in the video were his family, the station reported.

The case was featured on several different television shows and an "America's Most Wanted" episode on the McStays generated about 10 new leads, but none panned out.

Anyone with information on the case is asked to call Crime Stoppers at (888) 580-8477. Callers will remain anonymous and could be eligible for up to a $1,000 reward for information leading to the resolution of the case.

Complete coverage of the McStay family on Crimesider